A pregnant Jennifer Garner graced InStyle's first cover of 2012 where she shared her latest passion: advocating for early-childhood education. The glowing actress, 39, got choked up when she spoke about her family - especially husband Ben Affleck—confessing that, "Honestly, I would do anything for that man."

We declared our cover girl Drew Barrymore "The Queen of Cool" and she lived up to that title! In the February 2012 issue, the 36-year-old actress talked about her then-boyfriend, now–husband Will Kopelman and dished out sage aging advice: "I say, don't fight the rings on the trunk of the tree. Just keep counting 'em."

A blissful Jennifer Aniston graced our Spring Fashion issue. When we asked her to describe this phase of her life, the 43-year-old said she was "joyful and peaceful."

nicknamed "the Colombian Marilyn Monroe" by Modern Family co-star Ed O'Neill, was hard at work promoting her Sofia by Sofia Vergara Kmart collection, which she made to include shapes and sizes of all type. "Not everyone is Miss Universe," 39-year-old Vergara said, "but everyone has something - spectacular hair, nice legs, great boobs - that they can play up."

Wearing spring haute couture, Diaz, 39, dazzled on our cover while giving us astute life advice: "Life gets better as you get older, definitely. I don't want to be 20! I feel better than ever: stronger, more capable, and clearer. I really know myself now."

New mom Charlize Theron, 36, promoted her new summer blockbuster Prometheus and chatted with us about being a spokeswoman for Dior: "The whole experience of wearing them can be very otherworldly."

was promoting all sorts of new projects in our July 2012 interview: a dramatic new film, Oliver Stone's Savages, and a new beauty line, Nuance Salma Hayek.

We photographed the love struck Biel, 30, in a suitably romantic rose garden. She had just gotten engaged to Justin Timberlake (the pair married in October 2012) and dreamily told us, "You can find romance in front of a fireplace in the mountains, or at the beach. Romance is everywhere."

On the brink of her first-ever world tour, InStyle caught up with J.Lo in Rio de Janeiro. How does the superstar diva relax? "It's called the bath," the 43-year-old singer-dancer-actress-designer told us. "I don't ask for much. I really am a simple girl from the Bronx. Just a nice bathroom with a tub and hot water."

Oscar winner and proud mama Halle Berry, 46, graced our November 2012 issue. She answered our readers' burning questions about marriage, love, style, and regrets: She admitted to a teeny one - a tattoo on her backside!

Our last issue of 2012 featured an incredibly candid interview with actress Catherine Zeta-Jones, 43, about her struggle with bipolar disorder. "I hope I can help remove any stigma attached to it, and that those who don't have it under control will seek help with all that is available to treat it," she said. 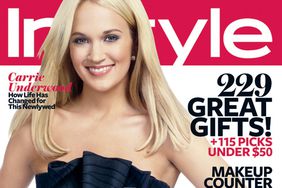