Kate Hudson, then 29, was co-starring in Bride Wars with Anne Hathaway. She wore a beaded tank by Etro, silver bangles by Stephen Dweck and a Fred Leighton ring. The beautiful actress told us, "I hate the term 'hippie chic.' Let's face it, hippies are not chic. I should know, I married one."

The double Golden Globe winner, then 33, was starring in Revolutionary Road and The Reader. She graced our cover wearing Herve Leger by Max Azria dress, Cartier earrings, a ring by DVF by H. Stern, Fred Leighton cuff, and bangles by Cartier and David Yurman. Winslet admitted: "I don't feel like a movie star in my life at all... I don't have my own plane. I don't have a chef or a trainer. It's very much a hat that you wear, and as soon as the event's over, the hat comes off. I'm back to being me and being Mummy, and that's my priority."

The multitasking actress appeared on the March 2009 cover wearing a rich, green Alberta Ferretti dress to promote her latest film, All About Steve, which she both starred in and produced. The body confident star, then 44, gave us a dose of inspiration in her interview saying, "I've never thought about getting breast implants. I like the way clothes hang on me. I'm athletic and have plenty of booty."

The newly married actress-producer-humanitarian-mother was starring in Cirque du Freak and working as an ambassador for UNICEF when she appeared in our 2009 Color Issue. "If I had to wear one color for the rest of my life... it'd be blue," Hayek, then 42, promised.

The 37-year-old busy mom was starring in Ghosts of Girlfriends Past and This Side of the Truth in 2009 when she appeared on our May 2009 issue in a Calvin Klein dress and Cartier bracelet and ring. How did the multitasking mom get everything done? With help from her Oscar-winning husband, of course! "It's the morning combo of nursing and trying to get Violet to preschool that's such a challenge. Ben will do the school run. He dresses her and does her hair. It's pretty funny."

The new mom (of twin girls!) was already back at work shooting a new pilot, Eastwick, when she appeared on our June 2009 cover. She wore a sexy, gold Missoni dress and gushed about her new best role yet: a mom! "Being a mom makes me feel whole and like I understand the meaning of life," Romijn said. "All I want to do is stare into my babies' eyes nonstop."

A radiant Michelle Pfeiffer was our July 2009 cover girl, appearing in a Versace dress and a Tom Binns necklace. The 51-year-old actress was excited about her newly acquired milestone age saying, "Once you turn 50, you feel grateful you made it. Because you've lived long enough that you've lost people you love. You realize you're on your second half, that your time is finite here. I want to make the time I have count."

Promoting her new films The Ugly Truth and Five Killers, cover girl Heigl, then 30, appeared in a navy Roberto Cavalli dress. She dispensed some sage dating advice in our interview including her number one rule: be yourself! "Isn't it better to be alone than pretend you're someone else? Be you. Find you. Be happy with that."

Mogul Jennifer Lopez, then 40, was working overtime promoting her rom-com The Back-Up Plan, launching her eighth perfume, and beginning work on a new album. She managed to squeeze in an ultra-glam photo shoot for our Fall Fashion issue wearing a sculptural Jil Sander dress. Is there anything J.Lo can't do? "I'm terrible with computers," she confessed. "I never go near one; I don't like them. I barely know how to log on, so I'm never online."

One of our favorite actresses, Drew Barrymore, made another appearance on our cover wearing a Valentino dress and Yves Saint Laurent jewelry while promoting her directorial debut, Whip It. For the photo shoot, we outfitted the 34-year-old in quirky fashions since she told us, "I love being the trippy one. I could never be conventional or prim."

America's sweetheart, then 33, appeared on our November cover in a gold DKNY dress and Brooks Brothers blazer. Witherspoon gave a surprisingly candid interview and explained: "I don't feel like I'm very guarded about what's happened in my life. We're all going through it."

Our teenage cover girl (then just 19!) wore an Oscar de la Renta and sounded wise beyond her young years in our interview, "The lesson I've learned most in life is that you're always going to know more in your future than you know now." 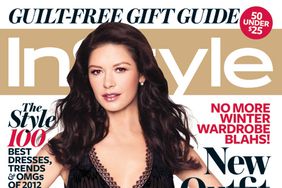