Holmes was appearing in Mad Money alongside Diane Keaton and Queen Latifah when she appeared on our first cover of 2008 (wearing a Dior vest and pants). The 30-year-old had recently entered a new phase in her life saying, "I'm living my ideal role. I love being a mom and a wife."

A very pregnant, very beautiful Halle Berry, then 41, appeared on our February 2008 issue wearing a Donna Karan dress. The Oscar winning actress had an eviable glow, which she graciously admitted was thanks to Baby Berry: "My skin is aglow from all the hormones. I actually wear less makeup now, which is really good. I want to stay pregnant forever."

Eva Longoria Parker, then 32, revealed her awe-inspiring closet inside our March issue. On the cover, she wore a Dries Van Noten dress and Ippolita earrings and bangles. Then newly wed gushed about her new name, "I love my new name. In Texas, people are formal, so now it's 'Mrs. Parker'. I feel so old! But I love it."

The 39-year-old actress was striking in an emerald Ralph Lauren gown on our 2008 Color Issue. She had just wrapped filming on George Clooney's Leatherheads, a challenge she welcomed. "I like the struggle of my work," Zellweger claimed. "I like that it's ridiculous and it matters to me for reasons I can't verbalize eloquently."

We kicked off summer with Carrie Underwood, then 25, answering questions from her fans. The busy Grammy winner admitted that she sometimes felt like she was leading two lives: "I kind of have two lives. There's 'Carrie Underwood,' the singer who walks the red carpets. Then there's 'Carrie,' the girl in sweats sitting home watching TV with her dog. I'm 'Carrie' 90 percent of the time."

The always beautiful Cameron Diaz, then 35, wore Marc Jacobs on our June cover and told us her tips for being sexy: "Sexy is being in the moment, whether that means being coy or coming on hard. Faking is always lame, and it never comes across the way you want it to."

Before she won her Oscar, Anne Hathaway appeared on our July 2008 cover promoting her role in Get Smart with Steve Carell. The actress wore a Versace dress and Fred Leighton jewelry and revealed how passionate she is about her career saying, "We're so lucky to do what we do for a living. So I like to enjoy every minute of it."

Rihanna posed for our August 2008 cover (in Bill Blass) before heading out on tour with Kanye West. The ambitious singer shared her plans for 2018 with us: "In 10 years I want to have already started my family and have some businesses of my own. A fashion line, a makeup line, and I still want to be doing what I'm doing at a much bigger capacity—by the grace of God!"

Uma Thurman appeared on our September 2008 cover (wearing a Donna Karan dress) to promote two new films: The Accidental Husband and Motherhood. She talked with us about how she feels about fame saying, "Being a celebrity is one of the fringe aspects of my job and one I've been tutored in, so to speak. I've learned how to use it in a positive way and benefited from the brush with fame I had in my teens. I got used to it slowly, rather than having a transcendent moment. Either way it's important to be clearheaded and not to let fame become toxic."

The 46-year-old actress was starring in The Women when she appeared on our cover in a Halston dress. In the interview, Ryan told us about her amazing career and where life has taken her lately saying, "I've been famous for a long time, and these last years there's been a great lull. So it has been me throwing a backpack on, traveling a lot - it's been fantastic."

The busy Grammy winner (wearing Gucci) had an album and two movies (Cadillac Records and Obsessed) to promote in November 2008! Queen Bey, then 27, was bursting with joy in spite of her busy schedule saying, "I am happy right now and this album has a lot of love songs that talk about my emotions - me naked with my heart exposed."

Supermodel Heidi Klum, then 35, let us in on her secret to success: "You have to have a goal. Some people haven't figured out what they want to do. I knew I wanted to be a model, and I wanted to become a good model." The Project Runway producer and host wore a Versace dress and Lorraine Schwartz cuffs on our last issue of 2008. 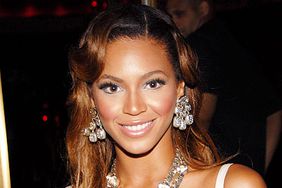