The 15 Most Iconic Playboy Covers of All Time

Whether you count the late Hugh Hefner as a style icon, a sexual freedom pioneer, a pompous chauvinist, or a little of all three, there's no doubt the founder of Playboy Magazine has had a resounding impact on the fashion and pop culture landscapes.

To remember the entrepreneur, who passed away yesterday at the age of 91, we've taken a look back at the 15 most iconic covers in Playboy history.

Behold, the first EVER issue of the magazine. Not a bad way to kick off a publishing legacy, if you ask us!

In 1971, Playboy made history by featuring its first-ever African American cover girl.

The iconic Charlie's angelrocked her signature shag and blinding smile on the magazine's December 1978 cover.

The O.G. material girl cast off her belongings for a nude shoot with the famous men's mag.

The longtime playmate put a NSFW twist on back-to-school on the cover of Playboy's October 1989 issue.

The late Anna Nicole channeled Playboy's inaugural cover star as "Playmate of the Year" in 1993.

The comedian is one of the few men to ever grace Playboy's cover. To this day, the issue remains one of the most valuable in the magazine's history.

The child star caused quite the stir when she posed for Playboy at just 19 years old.

The supermodel stripped down to just a tiny sarong for the pink and purple-hued cover.

Campbell phoned it in for her Playboy Christmas cover—just kidding, but she *was* holding a phone (pre-cell, remember?).

In the early days of her reign, "Hollywood's New Sex Star" posed for a cover.

The blue-haired Simpsons character stripped down for Playboy in 2009, recreating Darine Stern's 1971 cover.

For the magazine's 60-year anniversary, Moss dressed the part as a classic Playboy bunny in a strapless leotard, bunny ears, a white shirt cuffs and collar, and some seriously badass black pumps. 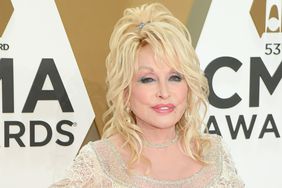