Forget 1Oak and Hyde, with all due respect to Los Angeles's nightlife scene, the only place that mattered over the weekend was Sweet Potato Music. Apologies to Saturday Night Live's Stefon and his expert club-curating skills, the music class hosted Hilary Duff, Mandy Moore, Ashley Tisdale, and Meghan Trainor's kiddos for a playdate, bringing together Hollywood power moms for a drum circle anyone would want an invitation to.

Tisdale and Duff shared images from the get-together on their Instagram Stories showing their new kiddos fanned out on blankets and playing with basic wooden instruments. According to the class's Instagram bio, the sessions offer up "play-based class ... that emphasizes early musical skill-building and fun." Their daughters, Mae and Jupiter, joined Moore and Trainor's sons (Trainor's son is named Riley) for the jam session.

According to Glamour, this isn't the first meeting of this particular mommy group. Duff and Moore introduced their new arrivals, Mae and Gus, respectively, to each other earlier this year. At the time, Gus was two months old and Mae was just five weeks old.

This particular musical baby playdate may be the first of many meetings of this group of future stars. Trainor joked that her son was already attempting to sing over the other kids, so if fans are hoping for a different kind of collab between these pop superstars, they may just get a few new baby-friendly tunes soon.

In addition to Mae, Duff is also mom to son Luca and daughter Banks. Gus — full name August — is Moore's first child with husband Taylor Goldsmith. Jupiter is Tisdale's first daughter with her husband Christopher French and Trainor welcomed her first son, Riley, back in February 2021. 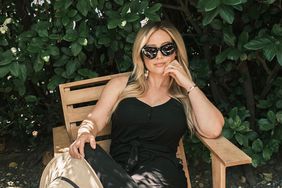 Hilary Duff's Hair Is Green Now — But Not on Purpose