Hauc and Jackson tell InStyle about their careers (and how Hallie's priorities have changed now that she's 8 months pregnant) and how they're prepping for tonight's big event.

Asking questions about the issues the American public cares about will be Telemundo’s Vanessa Hauc and NBC News’s Hallie Jackson, who will serve as moderators alongside NBC’s Lester Holt and Chuck Todd, as well as the Nevada Independent’s Jon Ralston.

Hauc and Jackson are both esteemed journalists: An Emmy Award-winner and Colombian immigrant, Hauc leads Noticias Telemundo’s investigative unit on environmental issues, a beat she is passionate about because of how it directly impacts her community. She works to make the issue personal, educating herself and her community on resources needed to become agents of change. Jackson is an MSNBC News anchor and a White House correspondent for NBC News, and her reporting appears across all NBC News and MSNBC platforms. Jackson gained a reputation for breaking stories while reporting from the campaign trail in 2016, where she got exclusives with Sen. Ted Cruz and then-candidate Donald Trump. She was also part of the team that was awarded the 2019 Hillman Prize for Broadcast Journalism for reporting on the Trump administration’s “zero tolerance” immigration policy.

Both women earned their spots as moderators through their talent, but their inclusion is especially important given that women have not historically been well-represented on the moderating panel. According to reporting from Refinery29, moderators in 2008 and 2016 were mostly men, with only a few exceptions. However, the 2020 presidential primary has included more women candidates than at any point in history, and in May 2019, the Democratic National Committee announced that they’d require every democratic debate to include at least one woman moderator. It goes without saying that diversity matters, as it ties into the range of questions asked, and perspectives represented: Hauc is an immigrant who is representing her Latino community onstage, and Jackson, who is 8-and-a-half months pregnant, is proving that women are just as adept as men at holding politicians accountable. Their presence is a reminder that as American women continue to fight for equality, representation is important.

One candidate voters will get to hear from for the first time is Michael Bloomberg, who recently qualified for his first debate. "The viewers are going to get to see him in action," said Hauc about his inclusion, "[he'll be] talking about the issues, and his proposals, and his plans."

Ahead of tonight’s debate, Hauc and Jackson told InStyle about their debate prep process, what the opportunity to moderate means to them, and what they want voters and viewers to walk away with.

(Learn how to watch the debate here. )

InStyle: Vanessa, you have done incredible work surrounding climate change reporting. Do you feel, so far, candidates are speaking enough about how intersectional an issue climate change is?

Hauc: When it comes to the climate crisis, I think that there are two factors that have changed the coverage over time. When you think about environmental issues, which I have been covering for 15 years, number one is that we see the impacts of climate change in a very real way in communities. We saw the news of Australia — the devastation that was left by the fires, and then of course, the [fires in the] Amazon jungle, and then we're seeing floodings in the United States and droughts in central America. I think people realize that this is impacting us now. This is not a distant phenomenon that we might not even feel as a generation. This is something that is happening today. And for Latinos, this is a very important issue.

Hallie, because so many women are balancing motherhood, pregnancy, and demanding careers, could you share a bit about what your experience has been like?

Jackson: I'm really lucky to have colleagues in the White House press corps who are both amazing mothers and amazing journalists. Their collective wisdom has proven invaluable in my own journey. My personal experience has felt unique in that I'm juggling the already-intensive demands of network coverage of the White House alongside my daily MSNBC show. I was extremely fatigued in my first trimester, which I chalked up to usual overwork, until my partner Frank reminded me I'm growing a baby. I've also been very conscious of taking care of myself as much as possible by eating healthy, working out, and resting when I need to. None of those things would have ever taken precedence over work for me before my pregnancy, for better or for worse, so for me it's been an unexpected shift in my priorities. As for this debate, I hadn't expected to travel at 8-and-a-half months pregnant, but my providers gave me the all-clear so I'm thrilled to be in Nevada! It'll likely be my last out-of-town trip before baby girl arrives.

Can you share how you select topics you’re planning to ask candidates about? What has debate prep been like?

Jackson: Debate prep has been, for a political nerd like me, really fun: you're surrounded by NBC News and MSNBC's best and brightest working through issues important to voters. It's the first debate I've ever moderated, so It's eye-opening to watch the process unfold. And of course, no matter how carefully you prepare, the script could all fly out the window depending on what the candidates do Wednesday night.

This debate is following what some perceive to be upsets in New Hampshire and Iowa, and it seems voters are really looking to these debates to help inform their decisions now more than ever. With that in mind, what do you want viewers to walk away knowing after this debate?

Hauc: Debates are a wonderful opportunity for viewers to understand exactly what the candidates are proposing and I think they are going to have more time to go in-depth into the different issues. We are going to have six candidates that have qualified and we are going to guide that conversation thinking about what our audience wants to know — what is important for the American and Latino families in the country. What I would love is if when people see the debate, they have a clear picture of who the candidates are and what they are proposing.

Jackson: At any debate, you want viewers to have learned something they didn't know before - whether it's about the candidates' temperament, policies, or preparedness for office. So if viewers tune in Wednesday night and get a piece of new information that helps inform their decision on who to vote for, then we've done our job.

Meet the Veteran Journalist Who'll Be Moderating the Next Democratic Debate

What does the opportunity to moderate this debate mean to you?

Hauc: It is a wonderful opportunity for anybody. I am an immigrant, I am also a mother, and represent the voices of my community in this country. The issues that are important for me that are affecting my community, they're issues that everybody has in mind. For us as moderators [it's important] to hold them accountable for what they say and make it really simple for the viewers to make a decision at the end — because at the end of the day, that's the whole point.

Jackson: It's incredibly humbling. Holding political leaders accountable on behalf of voters is at the core of what I do every day in my role as Chief White House Correspondent, so to do it on the national stage at a critical moment in the primary is a responsibility I take really seriously. 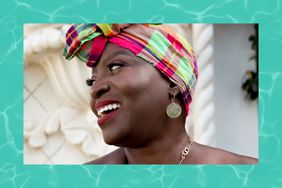