Including how Covid, long flights, and birth control can contribute to your risk.

"It's hard for me to tell this story, but I felt it was important for me to share this," Hailey Bieber, 25, told her 43 million fans in a video on Instagram last week describing her recent health scare. While the model recovered quickly and fortunately didn't suffer any lasting consequences (as evidenced by her attendance at this week's Met Gala!), she was rushed to the ER on March 10th after a blood clot traveled to her brain and she suffered a "mini stroke."

The most common cause of stroke is a blood clot, also known as venous thromboembolism, or VTE, and an estimated 900,000 Americans are affected by them each year, according to the CDC. But while most of us think of strokes and heart attacks as conditions that affect mostly older people, the reality is they can happen to anyone, at any age — something that Bieber's experience has highlighted.

The news has also left many young women with questions about how and why this happened, including how their birth control pills might contribute to their risk. We spoke to leading stroke experts to break it all down.

What is a "mini stroke" — and how common are they in young people?

In the video, Bieber describes sitting at breakfast with her husband Justin on an ordinary Thursday morning, when all of a sudden she felt "this really weird sensation that traveled down my arm, from my shoulder all the way down to my fingertips." The right side of her face was drooping for about 30 seconds, and when she tried to get words out she found that she couldn't speak. Recognizing the symptoms of a stroke, they called for the help of a nearby doctor, but when asked a few routine questions, she could not seem to form actual sentences.

As they waited for an ambulance to arrive, Bieber's speech started to slowly come back, and by the time she got to the ER she felt pretty much back to normal, she says. She scored a zero on the stroke checklist, which meant her attack had subsided as quickly as it came: this is labeled a Transient Ischemic Attack, also called a "mini stroke." TIA is a temporary blockage of blood flow to the brain that doesn't cause permanent damage, but may signal a full-blown stroke ahead.

Even though they're still less frequent among young people, as recent studies have suggested, strokes in younger age groups are increasing (even though the overall rate of stroke is actually decreasing). Between 10 and 15% of strokes occur in people ages 18 to 50, according to a 2020 study published in the journal Stroke.

One reason might be that risk factors associated closely with older populations are now occurring more and more in young people: obesity, infrequent exercise, high blood pressure, high cholesterol, and diabetes, explains Chi-Joan How, M.D., Associate Physician at Brigham and Women's Hospital and Instructor in Medicine at Harvard Medical School.

And among young people, women are usually at higher risk, since estrogen increases the chances of a clot forming and women have more estrogen than men, explains Nicolas Gendron, Ph.D., a cardiovascular researcher for the Hematology Department of Georges Pompidou Hospital in Paris. And as Bieber's audience is made up of primarily young women, her message is incredibly important.

How does having a "hole in the heart" contribute?

During elaborate testing done both at the ER and later on at UCLA, Bieber's doctors checked for pre-existing conditions like autoimmune diseases and clotting disorders, which can be a leading cause of strokes. She shared that they also wanted to look for a potential "hole in the heart," or PFO, a congenital heart defect in which blood flows between the upper chambers of the heart. They found a grade five PFO, the highest grade on the scale.

This helped determine what had happened: when a blood clot travels into the heart, it is usually filtered through to the lungs so it can be absorbed, but because of the size of Bieber's PFO, the clot escaped through the heart-opening and traveled to her brain.

PFOs are not necessarily a direct cause of a stroke, but another route for a blood clot to get to the brain, and they represent an underlying risk for a large number of young people who might not know they have one, explains Amy Guzik, M.D., a vascular neurologist and Director of the ​​Comprehensive Stroke Center at Atrium Health Wake Forest Baptist Medical Center. They are relatively common, and often nothing to worry about, but she recommends screenings if someone is already at higher risk for some of the other typical stroke risk factors — like high blood pressure, diabetes, or high cholesterol.

Bieber underwent a PFO closure procedure, and she's now recovering "really well and really fast," adding she's "relieved to be able to move on from this scary situation and live my life."

Does birth control increase the risk of blood clots?

Bieber says her doctors concluded that a "perfect storm" of coincidental factors caused her blood clot to form, but one factor that may have contributed was hormonal birth control, which can increase the risk of blood clots. "I just recently started birth control pills," Bieber says, "which I should have never been on because I am somebody who suffered from migraines. And I just did not talk to my doctor about this."

Research shows a connection between blood blots and oral contraceptives containing estrogen, as excess estrogen has been "shown to increase the risk of venous thromboembolic disease, myocardial infarction, and thrombotic stroke." Researchers are still studying the correlation, as well as the ideal dosage for birth control pills, but there have been positive developments: we now have progestin-only birth control methods, and even when it comes to traditional ones containing estrogen, doses have been lowered from 150 mg of estrogen in the 1970s to 50 or 20 mg in modern times.

Hailey Bieber went through something incredibly frightening, but Amy Roskin, M.D., ob-gyn and Favor's Chief Medical Officer, reminds us that the risk of experiencing a stroke while on hormonal birth control is relatively small.

Dr. Roskin explains that when looking into birth control options, giving medical professionals a complete overview of your medical history is key. This includes pre-existing clotting disorders and a family history of early strokes, but also frequent migraines, especially if they're accompanied by flashing lights, blind spots, or tingling sensations. After starting hormonal birth control, you should always look out for any pain, swelling, redness, or discomfort, as it could be a sign that the medication is not right for you.

If you're at risk for blood clots or strokes and unsure of which option is best for you, Dr. Roskin says, your doctor can point you in the direction of the safest contraceptive method. And if, like Bieber, you've had a stroke or blood clot, talk to your ob-gyn about switching to a non-hormonal method (including contraceptive gels, the copper IUD, or condoms), Dr. Roskin says.

What do long flights and Covid have to do with it?

Bieber was told that additional contributing factors could be the fact that she'd just flown to Paris and back in a really short time, sleeping through both flights without getting up to walk. You may have heard that when it comes to long-haul flights, the CDC recommends walking up and down the aisle every few hours to avoid clots forming in the legs. The longer you sit in the same position without moving, the greater the risk of developing a blood clot, so it's important to break up long plane journeys with movements and stretches — however small, they really do make a difference, experts say.

Another factor? Bieber's recent recovery from Covid-19. In fact, when she first got to the ER, initial accounts reported that doctors believed her medical emergency to be COVID-related, as she and her husband had recently tested positive.

While we're still learning about Covid, Dr. Guzik says that one of the things we do know is it increases clot risks — not just during the actual infection period, but sometimes even a couple of weeks afterward.

Dr. How explains this is because of inflammation caused by the viral infection, which in turn activates our coagulation system. As the tendency to develop blood clots, also known as thrombophilia, is a central feature of Covid-19, blood-thinning medication is often used on Covid patients, says Dr. Gendron. (Hailey Bieber has been prescribed blood thinners, as well as aspirin, following her TIA.)

The risk of blood clots is typically higher in patients who need hospitalization, especially in patients in the intensive care unit, because sicker patients have a greater inflammatory response. But no matter how mild the infection, Dr. Guzik recommends keeping in communication with your doctor for up to a month afterward and looking out for new weakness, numbness, imbalance, speech change, and vision loss, in which case getting to the ER right away is very important. "Even if it's brief, it can be a warning sign of something bigger coming in the next couple of days or weeks," she says. And of course the best way to prevent any added risk is to be vaccinated.

What to take away from Hailey Bieber's exprience:

Knowing your body and whether you're at higher risk of experiencing blood clots and strokes is crucial to preventing life-threatening situations. But in the event of an attack, the most important thing to remember, besides quickly getting to a doctor or emergency room, is staying as calm as possible. Bieber, who suffers from anxiety, says that this impacted her symptoms throughout the attack. "I noticed that … as soon as my anxiety would hit me it would make my speech feel funny again … and when I started to feel really scared, really anxious, it made everything worse."

"I feel very lucky to have had the healthcare resources and family support to be able to deal with this as quickly as I did," Bieber concludes. "If there's anyone out there who sees this and has experienced similar things but doesn't really know why, I would definitely encourage you to talk to a doctor." 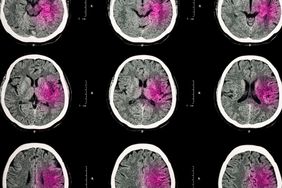