"We also have good days and bad days."

Drew Barrymore is continuing to show just how well-connected she is with her latest guest: Gwyneth Paltrow. During an appearance on Barrymore's new talk show, Paltrow didn't talk about vagina steaming, vagina candles, or vagina eggs. Instead, during her call, she and Barrymore talked about co-parenting with her ex-husband, Chris Martin. While Paltrow's perfectly curated life may seem easy and breezy, she explained that it's simply not the case and like any couple, not every day is Instagram-worthy.

"It's like you're ending a marriage but you're still in a family. That's how it will be forever," Paltrow said. "Some days it's not as good as it looks. We also have good days and bad days, but I think it's driving towards the same purpose of unity and love and what's best for [our kids]."

She also talked about the idea that separating or divorcing means that she can't still love parts of her ex-husband. Not only is their relationship better, she said that she's very much still in love with parts of Martin's personality.

"We have this idea that just because we break up we can't love the things about the person anymore that we loved and that's not true," she continued. "My divorce and my relationship with Chris now is better than our marriage was, so I think that it can be done."

As for their conscious uncoupling, Paltrow told Barrymore that she had the luxury of having a doctor explain exactly how they should co-parent, adding that she was told that "you have to have radical accountability" and "know that every relationship is 50/50."

"No matter what you think, how you think you were wronged or how bad you perceive the other person's actions, or whatever the case may be," Paltrow finished. "If you are brave enough to take responsibility for your half and really look at your own garbage and your own trauma and how it's presenting in the world and in your relationship, then there really is somewhere to go and something to learn and something to heal."

Paltrow also said that on bad days, she absolutely does not want to be near Martin, but she endures the bad days for the kids.

"You are also holding the other person in this sphere of humanity," she said. "We are all part good and part bad. It's not binary — we are all gray area. We all are trying our best. I really wanted my kids to not be traumatized, if it were possible. Chris and I committed to putting them first and that's harder than it looks because some days you really don't want to be with the person that you are getting divorced from. But if you're committed to having family dinner, then you do it." 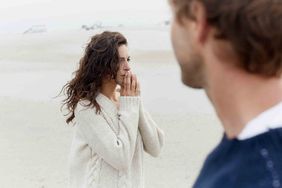