How to Stay Sexy and Not Get Murdered, According to Georgia Hardstark of My Favorite Murder

When I heard Georgia Hardstark was moderating a panel for Oxygen's new The Jury Speaks series, I immediately wanted to ask her what she thought of the Charles Manson film Quentin Tarantino announced. Of course, I completely forgot because I was starstruck, and in the weirdest way. As an avid listener of the My Favorite Murder podcast, I know so much about her and her counterpart Karen Kilgariff, I almost felt the need to ask if Hardstark and her husband Vince had watched GLOW on Netflix, what Karen was up to (slash is she meeting up later and can I swing by), and how the cat family was doing, but that's weird, right? This has never happened to me before.

My Favorite Murder is quite possibly the most unique true crime podcast out there because of many factors—Hardstark and Kilgariff discuss murder cases with a candor slightly reminiscent of Daria Morgendorffer and Jane Lane following an episode of Sick Sad World, but also of you and your closest girlfriends talking about a Jeffrey Dahmer documentary after three glasses of wine. It's funny, but not in a way that disrespects the victims, and drives home the point to look out for your fellow human. Each episode is almost like a therapy session, obviously touching on the topic at hand, but with a side of unfiltered discussion about everything going on in their own lives. Hardstark used to blog when she was in her 20s, so no topic is really off-limits. She and Kilgariff vocalize every weird thought any of us have ever had in our minds, ranging from those related to our fear and fascination with serial killers, to the everyday—like how good Queen Elizabeth's lipstick was in The Crown.

"What I love about the podcast is how many women listen to it, and that we get a chance to kind of push our agenda, which is women need to stand together and look out for each other," Hardstark tells me, as my eyes expand so wide in admiration, I probably looked like one of those stuffed animal Pound Puppies from the '80s. "No one is going to look out for us as much as a woman who has been in the same situation as us." It's happened in the My Favorite Murder community, in fact. Online, fellow murderinos—as we've been dubbed by Karen and Georgia themselves—band together on the podcast's Facebook page, exchanging stories about their own hometown murders or discussing related topics. One woman posted about an experience where another woman, a total stranger, stopped her from going to her car because she noticed a man had been following her. The two engaged in conversation until they saw him emerge from behind her car and leave. After walking her to her car, the woman who noticed dropped the show's tagline—"Stay sexy, and don't get murdered."

Courtney Love on Why She Signed on for Lifetime's Menendez: Blood Brothers Movie

The camraderie around the show only continues to grow. MFM communities have sprung up all over the globe, having regular meet-ups between live shows to discuss all things related to true crime. Hardstark and Kilgariff's own family members are also counted among the murderino community. "My sister has a different last name than mine, and she wore one of our My Favorite Murder shirts to work," Hardstark tells us. "Someone was like, 'Are you a murderino?' and her coworkers lost their minds when they found out she was my sister. It made me so proud, like what a bitch she was to me when I was younger and getting to one-up her a little bit." Hey, it's all love.

With each episode, Kilgariff and Hardstark emphasize that you should never put up with a potentially dangerous situation because you don't want to hurt the other party's feelings—or as the duo states more eloquently, "f-ck politeness," which has quickly become the motto of the show and my life. "Being polite at the risk of your own life is absurd to me," Hardstark says. "You can be kind, but you don't always have to be nice, you know? Be a good person, but sometimes it's okay to be a bitch." My mind flashes back to all the times on the subway I sat and listened to some dude being creepy to me on the subway, scared to tell him just to shut up and leave me alone, or all the times I gave out 867-5309 (you know, Jenny's number) when another equally-creepy guy just wouldn't stop until I responded in some way. You don't owe any of these people a response, and if you feel like you're unsafe, then don't ignore it. Who really cares if you come off rude?

Staying true to the "stay sexy and don't get murdered" tagline, but also topics typically featured on InStyle, Hardstark laughs as she speaks to a murderino's key accessories, second to a Sweet Baby Angel tee, of course. Speak loudly and carry pepper spray, a big handbag, and comfortable shoes. "I always have pepper spray on me, and unfortunately when I travel, I have lost so many of them to the TSA because I forget and it's always in my bag," she explains. "Have a big purse and guard it with your life, and have comfortable shoes in your purse or car so you can run if you need to."

As each episode concludes, Kilgariff and Hardstark balance out the intensity of the two murders discussed by reflecting on something good that happened to them during the week. At least if you asked me, the few minutes I had with Hardstark talking murder, and general life would rank at the top for my week.

That was so freaking cheesy. Steven, edit that out. 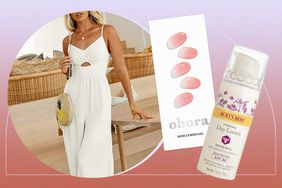