Take a look back at their sweetest moments together.

The human rights lawyer added a pop of color to her look on date night with George Clooney in a canary yellow Lanvin coat and matching eye shadow. Thigh-high boots completed the daring look.

The new parents attended the March for Our Lives and donated a generous sum in honor of their twins Ella and Alexander.

Amal supported her hubby at the premiere of his film, Suburbicon, in a strapless printed gown.

The new parents looked radiant at the Venice Film Festival for the premiere of George's new movie, Suburbicon.

George and Amal (and baby Clooney!) put their affection on display at the 42nd César Awards in Paris.

The lawyer visited her Hollywood beau on set of Suburbicon, where he took a break from filming to go for a walk with his wife and pup.

The couple enjoyed date night out at Hollywood's Night Under The Stars, where Clooney played host to some of the city's biggest celebs.

The power couple made their way into the UN General Assembly looking super stylish while walking hand-in-hand.

The couple was on hand to attend the CEO Roundtable that was lead by President Barack Obama as part of the United Nations General Assembly. The heads of the Clooney Foundation for Justice sweetly held hands throughout the event.

The hunky actor took his wife for a ride on his Harley in L.A. The stunning lawyer held on tight to her hubby during the ride.

The Clooneys looked so in love while heading to dinner aboard a water taxi in Lake Como, Italy.

The couple arrived hand in hand to the premiere of George's new flick, Money Monster, at the 2016 Cannes Film Festival.

Looking very much in love, the pair shared sweet nothings while walking the red carpet at the 66th Berlinale International Film Festival in Berlin.

The couple held hands and smiled throughout the screening of Clooney's film Hail Ceasar! at the 66th Berlinale International Film Festival.

The duo hit the red carpet at the premiere of Hail, Caesar!, where Amal wowed in an embellished Giambattista Valli Haute Couture number.

The duo gazed lovingly at each other as the posed at the premiere of Our Brand Is Crisis, but nothing could take our eyes off of Amal's chic Roland Mouret dress.

While at the Spanish launch party for his Casamigos tequila, George and Amal—who celebrate their first year of marriage on Sept. 27—stole a quick moment to share some PDA on the dance floor.

At the premiere of George's new movie Tomorrowland in Anaheim, Calif., the actor took a break from posing for the cameras on the red carpet to give his wife a sweet kiss on the hand. Talk about a gentleman.

The couple arrived at the 2015 Met Gala looking as happy and in love as ever, where they walked the red carpet hand in hand and mingled with fellow guests. Amal wore a tiered red Maison Margiela gown, while George coordinated with a red pocket square.

The couple had the look of love as George gave Amal a quick peck on the cheek while on the Met Gala red carpet.

The couple shared a laugh when Amal visited her handsome husband on the set of his film, The Money Monster, in N.Y.C.

The couple beamed as they stylishly made their way through Haneda Airport in Tokyo, Japan, smiling for their anxiously-awaiting fans.

For a date night in New York City, Amal paired a floral dress with a camel coat, black tights, and black heels, while George bundled up in jeans, a navy peacoat, and a grey scarf.

George and Amal made their debut as a married couple at the Golden Globe Awards in Los Angeles, where the civil rights lawyer stunned in a black Christian Dior Haute Couture gown which she unexpectedly paired with white elbow-length gloves.

The stylish pair stepped out for some sushi in Studio City, Calif.

To wrap up their wedding weekend festivities, Mr. and Mrs. Clooney headed hand-in-hand to a civil ceremony at Venice's Municipal Building. For the occasion, Amal donned a chic ivory-and-navy top (that matched her wide-brimmed hat) and ivory pants with a neutral clutch, while George looked dapper in a grey suit.

On the way to their civil ceremony in Venice, George helped his new bride into the waiting boat. Talk about a gentleman.

The new Mr. and Mrs. Clooney looked lovingly into each other's eyes on the way to a post-wedding brunch in Venice. For the occasion, Amal wore a breathtakingly romantic white lace Giambattista Valli frock with long sleeves and pink floral appliqués.

George sweetly kissed Amal on the forehead in the Piazza San Marco on their way to brunch.

At the Celebrity Fight Night Gala benefitting The Andrea Bocelli Foundation and The Muhammad Ali Parkinson Center in Florence, Italy, the then-fiancés sweetly cozied up to each other during one of the speeches. 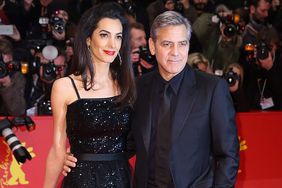 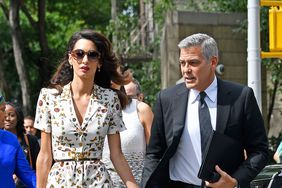