When it comes to Hollywood families, Gabrielle Union and Dwyane Wade's squad is goals. And last night, the Union-Wade household confirmed this sentiment to be true with a standout red carpet appearance at the Cheaper By the Dozen remake premiere.

Gabrielle, who stars in the film alongside Zach Braff, arrived on the carpet with her husband Dwyane Wade and their two daughters Kaavia James Union Wade and Zaya Wade (from Dwyane's previous marriage to Siohvaughn Funches) in tow.

At the screening, Gabrielle and Kaavia had an adorable mommy-and-me moment in matching black-and-white looks by Altuzarra. Kaavia wore a halter dress and tiny black ballet flats, while Gabrielle's outfit was much more grown up, consisting of a plunging bra top paired with a matching high-waisted maxi skirt. She accessorized with Bvlgari jewelry and platform PVC pumps.

Meanwhile, Zaya wore a three-piece floral silk set that included shorts, an open shirt, and a bra top that she paired with strappy heels, a white handbag, and diamond choker. Dwayne, for his part, opted for pinstripe pants and black long-sleeve shirt.

Gabrielle took to Instagram to show off the group's looks. One post included a sweet snap of her and Kaavia modeling their coordinating outfits, while another gallery captured the whole family. "Family Over Everything. #CheaperByTheDozen," she captioned the second post.

During the event, Gabrielle told Entertainment Tonight that her kids, probably like many children during the pandemic, think all she does is take Zoom calls — rather than make movies. "They don't think I do anything but Zooms," she joked. "They have not seen anything. Not a thing. And Zaya was [in] competitive cheerleading. One of her coaches was in Bring It On, still never saw it." 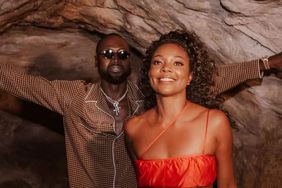 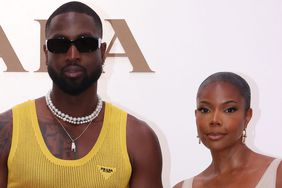 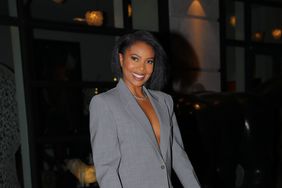