So many female comedians, actors, performers, directors, and writers have thrived in male-dominated Hollywood, giving us hope for the future of women's rights and providing us with empowering quotes to live by. Here, we celebrate the women who are determined to change the conversation and fight for true gender equality around the globe.

Keep scrolling for 11 of the most empowering women in Hollywood.

Watson first launched her gender equality campaign, HeForShe, back in 2014, introducing the initiative in a speech at the UN Headquarters. "We want to try and galvanize as many men and boys as possible to be advocates for gender equality." She has remained steadfast in her fight for gender equality, famously saying in 2015: "If you stand for equality, then you're a feminist." In 2016, she spoke at the UN General Assembly, tackling sexual violence in universities: "The [university] experience must make it clear that the safety of women, minorities, and anyone who may be vulnerable, is a right, not a privilege. A right that will be respected by a community that believes and supports survivors and that recognizes that when one person's safety is violated, everyone feels their own safety is violated."

Before she displayed the word "FEMINIST" in big bold letters during her Mrs. Carter tour, Bey penned an essay on why gender equality is a myth: "We need to stop buying into the myth about gender equality. It isn't a reality yet," she wrote. "We have to teach our boys the rules of equality and respect, so that as they grow up, gender equality becomes a natural way of life ... We have a lot of work to do, but we can get there if we work together. Women are more than 50 percent of the population and more than 50 percent of voters. We must demand that we all receive 100 percent of the opportunities."

In 2015, Lawrence wrote an essay for Lena Dunham's Lenny Letter, entitled, "Why Do I Make Less Than My Male Co‑Stars?" A Sony email hack in 2014 revealed that while she and her female co-star in American Hustle, Amy Adams, received seven percent of backend profits for the movie, their male co-stars (Christian Bale, Bradley Cooper and Jeremy Renner) all made nine percent. "I didn't get mad at Sony. I got mad at myself. I failed as a negotiator because I gave up early. I didn't want to keep fighting over millions of dollars that, frankly, due to two franchises, I don't need," she said. "But if I'm honest with myself, I would be lying if I didn't say there was an element of wanting to be liked that influenced my decision to close the deal without a real fight. I didn't want to seem 'difficult' or 'spoiled,'" Lawrence wrote. "At the time, that seemed like a fine idea, until I saw the payroll on the Internet and realized every man I was working with definitely didn't worry about being 'difficult' or 'spoiled.'"

"Bitches get stuff done," Fey once said on Saturday Night Live, proving that brevity is also the soul of being a boss.

"I am a woman with thoughts and questions and shit to say," Schumer said at the Gloria Awards and Gala, hosted by the Ms. Foundation for Women in 2014. "I say if I'm beautiful. I say if I'm strong. You will not determine my story — I will. I will speak and share and fuck and love and I will never apologize to the frightened millions who resent that they never had it in them to do it. I stand here and I am amazing, for you. Not because of you. I am not who I sleep with. I am not my weight. I am not my mother. I am myself. And I am all of you, and I thank you."

Arquette made her stance on wage inequality clear while accepting the Oscar for Best Supporting Actress in 2015 for her work in Boyhood: "To every woman who gave birth to every taxpayer and citizen of this nation, we have fought for everybody else's equal rights, it's our time to have wage equality once and for all and equal rights for women of the United States of America." Her speech got a standing ovation from the one and only Meryl Streep.

"I'm a feminist," she proudly proclaimed in an interview. "I believe that everyone should be treated the same, including race and sexuality." Adele also revealed that she has encountered plenty of "what do you know?" moments during business meetings. "It's like, 'Well, I'm the f—ing artist,'" she said. "'So I f—ing know everything, actually! Like, don't f—ing talk down to me!'"

Poehler provided many applause-worthy quotes on being a feminist in her 2014 memoir, Yes Please, including this gem: "Let me take a minute to say I love bossy women. Some people hate the word, and I understand how 'bossy' can seem like a s—tty way to describe a woman with a determined point of view, but for me, a bossy woman is someone to search out and to celebrate."

You'd be hard-pressed to find a quote from Lena Dunham that doesn't address feminist issues. While speaking at the 2015 Hollywood Reporter Annual Women in Entertainment Breakfast, the actress said, "It's our job now … to take the next step to support each other, to support younger generations … as women on a 'power list' it is our duty and also our privilege to transfer that power onto marginalized people with stories to tell ... I am advocating for all of us here to make it our mission to use our resources to turn this around as a team to consider women, women of color, LGBTQ people, not just tell their stories but to tap them for jobs that we have historically accepted as being done by white dudes in polar fleeces. It's the right thing to do and it's the only thing to do."

The funny woman behind everyone's favorite stop-animation video, "Marcell the Shell with Shoes On" (among many other movies and TV shows), told MTV, "Am I a feminist? F—k yeah, I'm a feminist. I think that unfortunately, people who are maybe threatened by feminism think that it's about setting your bra on fire and being aggressive, and I think that's really wrong and really dangerous."

In an interview with InStyle, Jones said, "I've never been made to feel that being a woman was a handicap. I'm very proud of my womanhood, and I find strength in being surrounded by ladies. I grew up with sisters — our age range spans 40 years. So I lived with a very diverse group of personalities, and we formed a very tight bond as a result." And her biggest piece of advice to young girls out there: "You are complex, and you are multidimensional. The sooner you start to embrace that, the sooner you'll be OK with yourself." 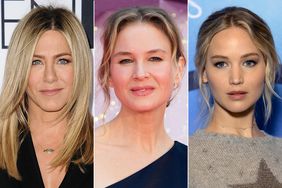