The Mad Men and women of the Sterling Cooper Advertising Agency have inspired a '60s style revival with their throwback threads, while the Upper East Side gang on Gossip Girl is always pushing the fashion envelope in up-to-the-moment designer labels. Which show's closets would you rather raid?

They both host dance-themed reality shows, but when it comes to on-camera style the two women couldn't be more different. Self-styled So You Think You Can Dance's Deeley mixes edgy designer pieces from Matthew Williamson and Alexander Wang with vintage items to create her signature looks. Dancing With the Stars host Harris keeps it strictly ballroom in gowns by designers like Dina Bar-El.

star Simon Baker has charmed TV critics and made countless female watchers thankful that he can't actually read their minds. Baker's main competition for the title of hottest guy on fall TV? Fringe star Joshua Jackson. Let's just say that we agree with Diane Kruger's taste in men as much as we agree with her impeccable taste in fashion. Who is your knight in shining armor?

She's a cougar, hear her roar! In the premiere episode of Cougar Town, the former Friend stripped down to her skivvies more than once, showing off her gorgeous figure. Less than two months after giving birth to twins, Romijn was back in fine form and starting to make the magic happen when she taped the pilot episode of Eastwick. Who had the hottest comeback this season?

When she's not filming 30 Rock, Fey seems to spend most of her time picking up awards for writing and starring in the critical hit. Now Poehler-Fey's BFF and former Saturday Night Live co-star-is getting attention for her own sitcom, Parks and Recreation. Who makes you laugh harder?

While The Beautiful Life is one of this season's first casualties, we won't soon forget designer Posen's appearance as himself on the fashion-themed CW show. Our hearts were filled with, well, Glee when Grammy winner Groban showed up on the Fox comedy playing a slightly creepy version of himself. Who played guest star best?

Klum and Banks were both '90s supermodels, Victoria's Secret Angels and Sports Illustrated cover girls. Now they each have a wildly popular reality show. Would you rather have Klum tell you whether you're in or out on Project Runway, or stand in front of Tyra waiting to hear if you're still in the running towards becoming America's Next Top Model?

After three seasons on the Canadian hit Degrassi: The Next Generation, Dobrev landed the role of Elena an orphan with a bloodthirsty boyfriend (will these girls ever learn?) on The Vampire Diaries. Jacobs-whose previous credits include guest spots on Law amp Order: Criminal Intent and Fringe-has plenty of bite as community college student Britta on the NBC comedy Community. Which fresh face is your favorite newcomer?

In 2008, Seacrest teamed up with Heidi Klum, Tom Bergeron, Howie Mandel and Jeff Probst to host the Primetime Emmys. This year, Harris made it a one-man show, singing, dancing and joking his way through the three-hour telecast and getting rave reviews. Who would you rather see host the 2010 Emmys?

When the re-imagined version of 90210 hit the airwaves in 2008, we wondered if a Melrose Place 2.0 was far behind. Sure enough, the campy melodrama debuted last month, introducing viewers to new characters while giving them a taste of old favorites like Sydney and Michael. Which updated classic is your new favorite?

On the surface, both Annie (Allison Brie) and Rachel (Lea Michele) appear to be teacher's pets, but we soon find out that each girl has a deliciously dark side. While Rachel finds it hard to conceal her thirst for fame, Annie tries to cover up a shady high school past. They may be awkward, but they're both ambitious. Who is your favorite new nerd?

Their characters live on opposite sides of the law, but looking gorgeous while holding a gun has little to do with the battle between good and evil. In Dollhouse, Dushku is Echo, a member of an underground group with a sometimes sinister mission. Torv is FBI agent Dunham, who brings tech criminals to justice on the Fox show Fringe. Who is the hottest leading lady?

They have limited wardrobes, so The Simpsons's Marge and Family Guy's Lois must rely on their signature looks. Marge channels an ink and pen Jackie O with her simple sheath dress, pearls and bouffant, while Louis opts for ballet flats, khakis and a tidy shoulder-length bob. Who has better style? 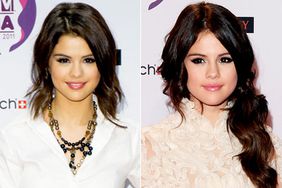