For this year's Costume Institute Gala, 34-year-old Mendes says she wasn't feeling 100 percent, even with her gorgeous dress (designed by her date, Calvin Klein designer Francisco Costa). "I felt terrible that I wasn't giving it my best and worried that I would let Francisco down. I came home early and thought, 'Well, scratch that one; we'll get 'em next time," she says. "Yet, the next day when I saw the pictures, I was stunned because they said I really rocked it. I think I did live up to the dress, after all."

Mendes says her mother was one of her beauty inspirations growing up. "She is the kind of woman who would never leave the house without putting on lipstick and her hair done," she says. Her other beauty idol growing up was Who's The Boss-era Alyssa Milano. "With her dark hair and Italian complexion, she was the only one out there who looked close to me," says Mendes.

"Make fun of my outfit, please!"

"I get excited when the tabloids make fun of something I wear," Mendes says. "This summer at the Dior Couture show, I wore this great dress-very '60s-and I was killed the next day. The tabloids just don't 'get' anything new."

Sure, we all know how damaging sun exposure can be, but that doesn't stop Mendes from indulging a little. "I don't like a fake tan," she says. "I can always tell a fake one. I have to get a real one." But when it comes to her hair, would she go for faux with blonder locks? "No," she says, "I can't go lighter."

Mendes has a love/hate relationship with the red carpet and posing for photos. "What does posing for photographs have to do with me get my next film? It's not natural, yet it's important and celebrates your film," she says. "Plus, it's nice when people tell you the next day that you looked beautiful."

Up next for this Los Angeles-bred beauty is The Women, where she plays a department-store perfume spritzer, and a racy new fragrance campaign for Calvin Klein. She explains that as a child she was doused in a perfume called Violettas-it's a Cuban tradition. "It wasn't until junior high that I tried other scents because I wanted to come off as older," she says. "I liked L'Air du Temps-anything that made me feel more mature." 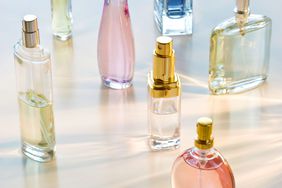