Happy birthday, Emma Thompson! The seasoned thespian and Academy Award-winning actress is turning 57 today and we're honoring the star with a look back at some of her best quotes yet.

Yet with all these characters, the one role that Thompson is best at playing is, of course, herself. The actress is known to speak her mind, whether it's about high heels—never forget her 2014 Golden Globes moment, when she presented in bare feet and chucked her Christian Louboutin heels behind her—or ageism in Hollywood. Read on for some of her most inspirational (and hilarious) quotes:

On wearing high-heeled shoes: "Heels get more painful as you get older. I've got band aids on every single toe."

On conjuring emotion when acting: "If you've got to my age, you've probably had your heart broken many times. So it's not that difficult to unpack a bit of grief from some little corner of your heart and cry over it."

On ageism in show business: "The age thing is insane.… I remember saying years and years ago, when I was 35, that they'd have to exhume somebody to play my leading man.… Nothing's changed in that regard. If anything, it's got worse."

On sexism in Hollywood: “I don’t think there’s any appreciable improvement and I think that for women, the question of how they are supposed to look is worse than it was even when I was young. So no, I am not impressed at all.”

On menopause (at least during a polar vortex): "It's such a cold night and it's the only time I've actively been grateful for menopause. I've been entirely comfortable." 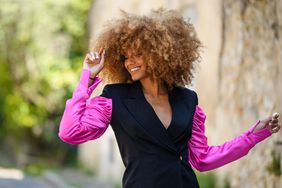