In case you were wondering, Emily Blunt and John Krasinski are still going strong.

In a new interview with People, Blunt discussed going through the pandemic with her husband, telling the magazine, "Having John's support is everything, because we are each other's confidant. That shared understanding has really been a very vital anchor for me."

Blunt and Krasinski have been married for ten years, and share two daughters: six-year-old Hazel and four-year-old Violet.

"Being around little ones during the pandemic was such a saving grace because they would just be bouncing around the house, and your job is to protect them from what is happening and make sure their life remains joyful," she said. "That was a pretty great lifeline for John and me during the pandemic, for sure."

The couple's second joint feature together, A Quiet Place II, was one of the first movies to have its release date pushed back amid the pandemic. In the meantime, Krasinski spent the early part of quarantine making a YouTube series called Some Good News (in which he reunited with some of his former Office co-stars) to spread some positivity.

Blunt, who stars in the upcoming film Wild Mountain Thyme, said she and her family have been passing time in isolation the same way many of us have — by watching The Crown.

"We watched The Crown in three days, and then we were bereft," she said. "That's the other thing about the pandemic: how lost and broken you feel once your favorite show has ended. Like, what should I do with my life now?" 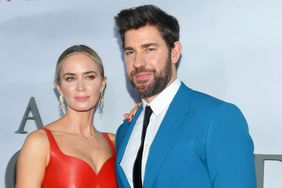