Hulu's take on the infamous "texting suicide" case is going to be your next true-crime binge.

June 2017 — no matter who you are or where you were, you were probably bombarded with news notifications, Tweets, and clickbait-style headlines about the texting suicide case between Michelle Carter and her boyfriend, Conrad Roy III. You couldn't avoid it even if you tried. In the digital age, unsolicited information spews at us across a never-ending rotation of media channels and social platforms. As someone who has struggled with anxiety, OCD, depression, and other mental health issues my entire life, I didn't want to read about the suicidal encouragements of 17-year-old Carter to a depressed 18-year-old Roy. I tried to avoid the case, but to no avail.

But like many things on our phones, it was pretty much unavoidable. We hold the whole wide world in the palm of our hands. We can send videos and photos with the click of a button. Or even make a substantially large bank transfer. And now, things we don't even choose to see pop on our feeds, thanks to eerily intelligent algorithms. We also have a direct line to hurtful comments on social media or via text messaging. And admittedly, it may be even easier for some of us to project our inner hurt onto others from behind the screen, whether that be a DM, comment, or text thread. And it's all there in a handheld device.

Elle Fanning, the star of Hulu's new show The Girl From Plainville, depicting the tragedy and subsequent trial, says that is what makes this case so unique and unprecedented. "I could understand the false sense of reality that's created with technology," she told me via Zoom — yet another product of the Internet age. "And it's such a modern story because it only could've happened today. When you get a text from someone [it's] that instant gratification — that you can be whoever you want to be behind the screen."

The show, created by Liz Hannah and Patrick Macmanus, is based on the 2017 Esquire story of the same name written by Jesse Barron. Carter and Roy met in Florida in 2012 and continued speaking over the next couple of years, but their relationship was primarily virtual, having only met in person around five times despite living in neighboring towns about an hour apart. In 2014, Roy was found to have died by suicide. It wasn't until police investigated his phone that they found Michelle's persuasive texts. Fanning was given a chance to read through practically their entire relationship via their printed-out text messages.

"I read through all of [the texts], which was a very difficult read, very haunting," she said. "But still, they only met five times, so their whole relationship is in there, and you can see the ebbs and flows and the nuance — how it was a very open, beautiful at times, very honest, very dark at times, very silly. There was a lot in there — not necessarily the dark things — that we all kind of experience."

7 Common Types of Depression You Might Be Dealing With

In a similar vein to believing everything we see on our phones, the media played a huge part in the portrayal of these two troubled teens — something Fanning remembers vividly from the time of the trial.

"I don't think I really understood how much I understand now of what the media did to her," she explained. "They really painted her as this black widow, vixen, manipulative young woman, and obviously, what happened was the worst possible outcome and a huge tragedy. [But] she was very one-dimensional, so it was something that people formed a lot of opinions on, based off not all the details necessarily. For Roy, too, he was portrayed very one-dimensionally. He was the victim in this, but still, we knew nothing about him as a young man, who he was."

When it came time for Fanning to become Carter, she studied their text exchanges and watched court videos and documentaries. But the costuming, hair, and makeup are what both physically and mentally transformed her into her. After the first photo from the series was released, the internet went wild over Fanning's uncanny resemblance to Carter — dark eyebrows, bob haircut, and all. Another reason Fanning's appearance seemed so familiar is because the show's costume director Mirren Gordon-Crozier recreated Carter's courtroom attire exactly — down to the same pieces of clothing from the same stores like Anne Taylor and Chico's.

"She back searched all the clothes so [they were] the exact clothes she wore in court," Fanning explains. "It was a very eerie feeling. I did not feel like myself."

It's easy to view Carter as an evil, sinister character, a seductress of death. In the first episode, we even see her practice crying over her boyfriend's death in front of the mirror, set to a scene from her favorite TV show, Glee. Despite the part she played in his suicide, she manipulates and befriends Roy's family, throws a fundraiser, and meets his friends — people she barely knew before his death, as she and Roy kept their relationship mostly under wraps.

But throughout the show's eight-episode arc, we pull back the layers and the audience sees that Carter faced her own demons. Not that it's an excuse for her impactful, fatal words, but we know she also struggled with her own mental health issues, like an eating disorder and body image issues, according to HBO's 2018 documentary, I Love You, Now Die. The rare case was a flashing sign that mental illnesses should not be ignored, that we should start conversations and hack away at the stigma that clouds mental health issues.

"I hope that [the show] can de-stigmatize mental health and get us pushing that conversation forward," Fanning said. "I think it's really easy to hide how you feel, people can be very secretive about that, and you have to be conscious of that and of other people's feelings. Words really can do irrefutable damage to someone, and you have to be aware of how other people feel."

Elle tells me that she doesn't want the show to fail in the ways some of its predecessors have when dealing with mental health. "I hope that this show is also an honest portrayal and doesn't romanticize suicide and those thoughts that we all have had all experienced." 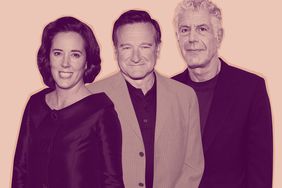