Even Drew Barrymore Gets Stood Up On Dates

From rom-com to real life.

All Drew Barrymore wants is to go on a blind date — which, yeah, can be tough when you're Drew Barrymore. According to Vulture, Barrymore stopped by Watch What Happens Live With Andy Cohen and a caller asked her if she'd ever tried her hand at dating apps. She did, it turns out, only she saw the whole thing as a huge disaster.

When the caller asked if she'd seen other celebrities on the apps, Barrymore said "a lot," and though she didn't name anyone specific, she said that, for her, swiping through Raya "was like looking through an Us Weekly."

As for her own experience on dating apps, Berrymore said that she managed to set up a blind date, but that it wasn't anything like she'd hoped. According to Berrymore, she "did terribly" and added that it was a "car wreck." She explained that on the date, she "got stood up by a guy who owned a restaurant."

"I got stood up, and I didn't match with anyone, and my friends gave me this bloated sense of false confidence," she said. "They were like, 'You should try it. You will do great!'"

Failed dates or not, Barrymore said that she still managed to have a good time, even though nothing happened as planned.

"I definitely had fun with it," she finished. "I've always wanted to go on a blind date, but my life got in the way of that. So, I thought online dating might satiate that desire, and [...] um [...] yeah, no. It was a real wake-up call." 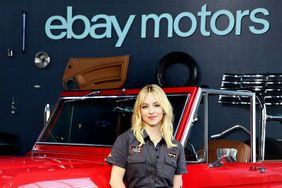