Demi Lovato's Letter to Her Late Father Is a "Beautiful Release"

"It was this beautiful release of all the resentments I had toward him."

As a way to put her mental well-being at the forefront of her life, Demi Lovato wrote a letter to her late father, Patrick Lovato, as a way to exorcise her "daddy issues" and thank him for the good things that she got from him. Published in Vogue, Lovato called it a "gratitude letter."

"There was the anniversary of my father's death, which is a couple of days after Father's Day — a really hard time of year for me," Lovato wrote. People reports that in the past, she has called him "abusive" and "mean." "But this year, something happened."

She explained that writing the letter was a "beautiful release" and allowed her to "release" any feelings of resentment that she was still harboring. After she finished, she said, she felt like she'd shed all of her "daddy issues" and could move forward without that emotional baggage.

"I wrote a gratitude letter to him, thanking him for all the things that I got from him," she explained. "It was this beautiful release of all the resentments I had toward him. I realized, for the first time, that I wasn't going to have daddy issues for the rest of my life."

Her letter continued, urging her fans and readers to remain hopeful as 2020 rolls forward through the coronavirus pandemic, the Black Lives Matter movement, and the upcoming election.

"Moving forward, I want to put my energy into my music and my advocacy work. I want to continue to strive to be a better person. I want to inspire people in many different ways to do the same," she continued. "Above all, I want to leave the world a better place than when I got here. There are a lot of things that need to be done before that, but together I believe we can make it happen. You just need to be a little bit hopeful."

Patrick Lovato passed away in 2013. People notes that Demi's mother, Dianna De La Garza, recounted multiple instances of domestic abuse back in 2018 when she published her memoir, Falling with Wings: A Mother’s Story.

"I was very conflicted when he passed because he was abusive," Demi said in 2015. "He was mean, but he wanted to be a good person, and he wanted to have his family. When my mom married my stepdad [Eddie De La Garza], he still had this huge heart where he would say, 'I'm so glad Eddie's taking care of you and doing the job that I wish I could do.'" 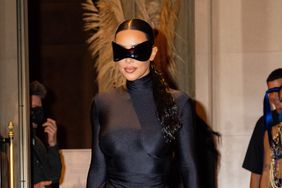