"Who would have thought all these years later we are celebrating 21 years of marriage."

Twenty-one years into marriage, and David and Victoria Beckham are still going strong. On the Fourth of July in 1998, they tied the knot during a lavish ceremony at Luttrellstown Castle in Ireland, and to celebrate their special day, the pair is looking back at how far they've come in two decades.

On Saturday (July 4), the pair reminisced about the life that they've built together in sweet posts dedicated to one another on Instagram. In a video montage filled with unseen throwback photos of the couple and footage of Victoria during her Posh Spice days, David revealed the moment he first fell for his wife in the caption, writing: "Well about 23 years ago I was sat in a room with Gary Neville and the spice girls were on the TV and I turned around to him and said 'ohhhh I like that one in the little black catsuit' 😄."

He added, "Who would have thought that all these years later we are celebrating 21 years of marriage and have 4 of the most beautiful and perfect kids.. Thank you & Happy Anniversary I Love You."

Victoria returned the adorable gesture with a slideshow of her own — set to the tune of Elton John's "Something About The Way You Look Tonight." "Happy Anniversary @davidbeckham ❤️❤️❤️ I can’t believe it has been 21 years since we said 'I do,'" she captioned her post. "Four children, four dogs, so much laughter and I love you more each day. xxxxxx."

It also appears as if Victoria's initial introduction to David was love at first sight for her, too. In 2017, the fashion designer wrote a letter to her 18-year-old self for British Vogue, detailing their romantic meet-cute.

"On boyfriends and lasting love: learn more about football, especially the offside rule. And yes, love at first sight does exist," she wrote. "It will happen to you in the Manchester United players’ lounge – although you will get a little drunk, so exact details are hazy."

"While the other football players stand at the bar drinking with their mates, you will see David standing aside with his family. (He’s not even in the first team at this stage – you are the famous one.) And he has such a cute smile. You, too, are close to your family, and you will think how similar he feels to you. He’s going to ask for your number. (He still has the London-to-Manchester plane ticket on which you wrote it.)" And the rest, as they say, is history. 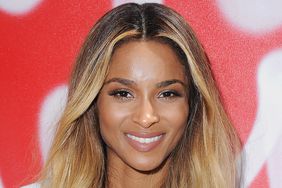 How to Perfectly Coordinate Family Winter Dressing, According to Ciara