Daniel Radcliffe and his longtime girlfriend, Erin Darke, walked a red carpet together for the first time in nearly a decade. The duo attended the premiere of Radcliffe's new film, The Lost City, which also stars Sandra Bullock and Channing Tatum. While Radcliffe and Darke, who starred in the show Good Girls Revolt, have been together since 2012, they haven't been as open about big red carpet moments, having their last photo op together at the Tony Awards back in 2014, when Radcliffe was nominated for his role in The Cripple of Inishmaan.

The two met on the set of How to Kill Your Darlings and currently live together. Radcliffe spoke to Playboy about how they met, which, naturally, involved filming a sex scene together.

"That's a wonderful record of us flirting for the first time," he said. "There's no acting going on — not from my end, anyway. There's a moment when she makes me laugh, and I'm laughing as me and not as my character. She was incredibly funny and smart. I knew I was in trouble."

Radcliffe didn't talk about his love life when he spoke to Entertainment Tonight, but he did talk about working with Bullock, saying that he, like all of us, has seen her oeuvre and that he was thoroughly impressed with her both in front of and behind the camera.

"I grew up watching Sandra's movies, so to be on set with her was very, very surreal and cool," he said. "I can't say enough about how impressed I was by her as a producer as well. Obviously, she's going to be an amazing actress, but she was literally getting pulled out of the water from stunt sequences, being pulled onto the boat and scheduling marketing meetings. A lot of actors take a producing credit as a vanity credit or whatever, very much not her. She's produced this movie." 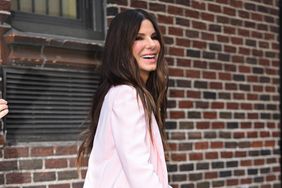