"All I'll say about it, anything else you hear doesn't matter."

Cole Sprouse has confirmed rumors that he and Lili Reinhart have broken up.

"Lili and I initially separated in January of this year, deciding to more permanently split in March," he wrote in an Instagram post on Wednesday. "What an incredible experience I had, I’ll always feel lucky and cherish that I had the chance to fall in love. I wish her nothing but the utmost love and happiness moving forward. All I’ll say about it, anything else you hear doesn’t matter."

Though it was reported back in May that the Riverdale co-stars had split after nearly three years of dating, neither confirmed the rumors until now.

Sprouse added a message of support for Reinhart in reference to her upcoming film, Chemical Hearts, writing, "Also her movie comes out soon! I’m sure she’s just as incredible in it as everything else she does. Thanks guys."

His comments come after Reinhart discussed her mental health during quarantine with Refinery29, telling the outlet, "The last couple of months have probably [been] the most emotional few months of my entire life and my therapist [told] me, 'Your body's going through withdrawal from love. You're used to having this exchange of happy chemicals between you and the person that you're with.' In moments of my life, I have dropped every ounce of pride that I had just to be like, Love me. Please take the pain away for a day, a second, an hour, just so I can feel that fix again."

Though some took that to mean that she was addressing the reported split, Reinhart clarified on Twitter, "Quotes taken from my most recent interview are not about a 'breakup.' They are about the depression I've felt over these last few months. Tired of people taking my words out of context and piecing together their own story for clickbait."

She added: "I would never speak so candidly about something as personal as a breakup. That’s incredibly private. I was addressing my depression." 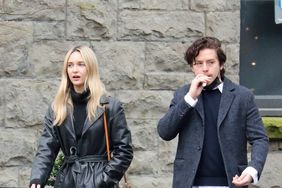