Ciara is already working hard on her post-baby snapback.

Just four weeks after giving birth to her daughter Sienna, the mom of two shared her progress on Instagram Tuesday, revealing she's dropped a whopping twenty pounds since she and husband Russell Wilson welcomed their little one to the world.

"I said I wasn't going to gain 60lbs Carrying Sienna, and... I did exactly that!! 4 weeks after her birth I lost 20 lbs. This Weeks Goal is 10lbs. I was 183 yesterday. #BounceBack #LevelUp," Ciara captioned a snap, which showed her standing on a scale that read 178.6.

There's no doubt she'll meet her goal. After Ciara gave birth to her son Future in 2015, it only took her four months to shed the 60 pounds she put on during her pregnancy. According to Shape, she quickly dropped the weight with one-on-one boxing workouts with celebrity trainer Gunnar Peterson and a low-carb diet.

"After he was born—when I couldn't exercise yet—I kept eating, and I gained 60 pounds," Ciara told Shape. But as soon as her doctor told her she could start training, she hit the treadmill, and worked out two or three times a day, including one intense session with Peterson.

"Five days a week, Gunnar puts me through an hour-long plyometric cardio circuit that always includes boxing elements," she continued. "What's amazing is that you're getting three-in-one training; it's hitting your muscles, it's a cardiovascular workout, and it's a mental exercise. You have to be super focused when you're boxing. After I've done a few rounds, I feel as if I can conquer the world."

Ciara and the Seattle Seahawks quarterback welcomed their little one on April 28. Sienna is the first child for Wilson, and the second for the 31-year-old songstress. 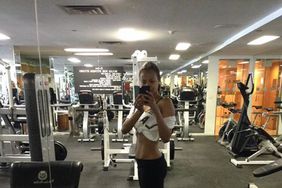