From Christian Siriano to Zac Posen, take a look at Christina Hendricks' best fashion moments on the red carpet.

Hendricks cranked up the drama at the Mad Men Black & Red Ball in a teal butterfly-embroidered taffeta Zac Posen gown with an incredible sweeping detachable ball skirt. The finishing touch? Brilliant diamonds that glittered from her lobes and wrist.

At the 2014 Cannes Film Festival, the actress stunned in an Alberta Ferretti black chiffon gown with delicate jet-black crystals and beaded embroidery on the sheer bodice, which she styled with a Thalé Blanc clutch and Lorraine Schwartz jewels.

For her 2014 Emmys red carpet stroll, the Mad Men star amped up the luxe factor in a scarlet gold-embroidered Marchesa gown that she styled with Neil Lane jewelry by LoveGold and a Lee Savage clutch.

The bombshell played it safe with a black Christian Siriano gown (with pretty delicate lace straps), adding pops of color by way of her gemstone jewels and green confetti Edie Parker clutch.

At the 2012 Creative Arts Emmys, Hendricks was radiant in a one-shoulder Jenny Packham creation with a black-and-white print of women's faces. "It was absolutely a favorite because it felt like a perfect party frock," the star said about her look.

Hendricks worked her curves at the 2011 Emmy Awards in an exquisite skin-skimming Johanna Johnson design with crystals embroidered all over.

The Mad Men star sparkled in 193 carats worth of Chopard diamonds on her earrings and two bracelets, which added a touch of shine to her red silk crepe one-shoulder gown with a ruffle strap by Romona Keveza look. She also carried a rectangle clutch by Judith Leiber.

At the 2010 Creative Arts Emmy Awards, the Mad Men actress made the most of her famous curves in a waist-cinching Christian Siriano ballgown with a dramatic draped skirt, complete with BelaDora jewelry.

Red and purple made a striking color combo when the Mad Men star paired her auburn locks with Zac Posen's romantic lilac gown at the 2010 Emmy Awards. 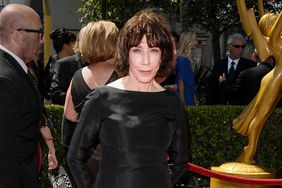 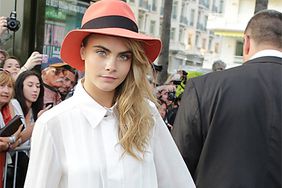