Christina Aguilera is hitting us full force with the nostalgia. On Tuesday night, the pop singer was honored with the Music Icon award at the 2021 People's Choice Awards, where she gave a nod to her legendary "Dirrty" outfit. Iconic indeed.

Xtina arrived at the star-studded PCAs in a recreation of the 2002 performance costume, which included a black, white, and yellow corseted leotard over fishnet stockings with flared, yellow chaps.

The singer's glam even paid tribute to the early aughts moment. Her long, platinum-blonde tresses were pulled half-up and dyed dark underneath with black strands woven into some of the curls around her face. She opted for a smokey eye with black, geometric eyeliner.

While accepting her award, the singer slipped into a matching, silk robe-like gown and told fans that this moment was "surreal."

"I have always strived for my music to communicate messages of empowerment, whether it's speaking my own truths or giving voice to those unable to do so on their own," she said. "My artistry has always been for the fighters in this world, for those who face adversity, for those wanting to evoke change, my music is for you."

The star also performed a medley of her greatest hits. 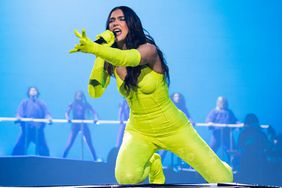