Where does Chrissy Teigen keep getting this stuff? And by stuff we mean these amazing fast-food pajamas. A few weeks ago, the internet lost its cool when she debuted her Big Mac PJs, and now the 31-year-old model is at it again—this time breaking out a Kentucky Fried Chicken onesie.

Last night, Teigen and hubby John Legend enjoyed a “pajama jam party,” basically an excuse (and a good one!) for Teigen to show off more of her impressive fast-food-themed sleepwear. The Sports Illustrated model skipped the silky lingerie and opted for a red and white onesie featuring the visage of Colonel Sanders on the front, while Legend went with a more modest, allover fried-chicken-print onesie (both by ScruffySwanks, InStyle has learned). The two posed for a cute picture together, reminding us that they are, in fact, one of the coolest couples around.

As if the outfit itself wasn’t hilarious enough, Teigen also tweeted about the struggle of getting ready, writing, “The best part of a pajama jam party is my hair and makeup people trying to make a look out of a kfc onesie.”

Eventually her team made it work, opting for two “space buns” and an understated makeup look.

Chrissy and John, please invite us next time. 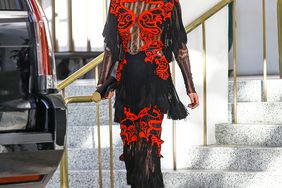 How Chrissy Teigen Does Braless Dressing 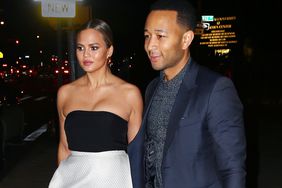