And the wedding had some very interesting (Mary-Kate Olsen-approved) details.

Two years after having a city-hall wedding in March 2020 (on-trend as always, of course), Chloë Sevigny made things officially official with her husband, Siniša Mačković, wearing a sheer ruffled dress during a small ceremony with friends and family yesterday. Professional man-about-town and Sevigny BFF Derek Blasberg shared photos on Instagram, which show the bride in a floor-sweeping tiered, sheer Jean Paul Gaultier gown, airy veil, and carrying a bouquet of calla lilies tied with a long, pink ribbon.

People noted that Sevigny and Mačković, the director of an art gallery, had their son Vanja involved in the ceremony, and the couple's pals, including Natasha Lyonne and magazine editor Olivier Zahm, were on the guest list. Blasberg's carousel also showed the couple riding off in a vintage convertible decorated with a sign that read "Just Married." The magazine adds that while Mačković wore a classic black tuxedo for the ceremony, Sevigny had multiple outfit changes throughout the event. Blasberg's photos also show a very specific, Olsen Twin-approved touch: cigarettes for guests to enjoy.

Chloë Sevigny Shared a Sweet Photo From Her Secret Wedding

"Married on a Monday, March 9th, 2020 Happy one year anniversary, my love💍," Sevigny captioned a photo back when the couple got married at city hall. For that ceremony, she wore a black dress but kept things traditional with a white veil. It was just two months before the couple welcomed their son.

"It was just something that was supposed to happen," she said of becoming a mother. "And in my early 40s, when it hadn't, I was like, 'I have to sort of actively try and make this happen'... and then I struggled for a while. We had a night out dancing and drinking and went home… and then it just happened, and it stuck, which I had had trouble with in the past. And I was like, 'Wow, this one — he/she — wants to be here.'" 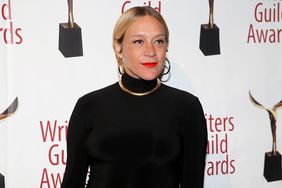 Chloë Sevigny Shared a Sweet Photo From Her Secret Wedding