Mandy Moore and Minka Kelly helped famed fashion photographer Helmut Newton celebrate the opening of his new exhibit Helmut Newton: White Women, Sleepless Night, Big Nudes at the Annenberg Space for Photography museum in Century City, California. "Helmut Newton is one of the most powerful and influential photographers of the past century," said Wallis Annenberg, Chairman of the Board, President and CEO of the Annenberg Foundation. "If Newton's work was controversial, I believe it's because he expressed the contradictions within all of us, and particularly within the women he photographed so beautifully: empowerment mixed with vulnerability." The exhibition will run from June 29 through September 8, 2013 and is set to feature 100 of Newton's most influential pieces, along with two short documentaries about his life. Learn more about his work by heading to annenbergspaceforphotography.org.

Plus, click the photo to see all the photos from this week's star-studded fetes.

helped famed fashion photographer Helmut Newton celebrate the opening of his new exhibit Helmut Newton: White Women, Sleepless Night, Big Nudes at the Annenberg Space for Photography museum in Century City, California. The exhibition will run from June 29 through September 8, 2013 and is set to feature 100 of Newton's most influential pieces, along with two short documentaries about his life. Learn more about his work by heading to annenbergspaceforphotography.org.

premiered their new movie Hot Flashes in partnership with the American Cancer Society in Hollywood. The film is about a group of middle-aged women who challenge the high school girls' state basketball champs in order to raise money for a breast cancer screening truck. It opens in theaters July 12.

posed together before hitting the red carpet to premiere their new film in Moscow. The Lone Ranger opens nationwide July 3.

joined the designer at the annual Serpentine Gallery Summer Party she co-hosted in London's Hyde Park. The event raised money for the modern and contemporary art institute. To learn more about the London landmark, head to serpentinegallery.org.

posed together in the spacious gardens during the Serpentine Gallery's Summer Party.

premiered their new movie Some Girls in Los Angeles. The film, about a man who on the eve of his wedding decides to take a cross-country roadtrip to visit his ex-girlfriends in order to make up for past wrongs, opens in select theaters June 28.

celebrated the launch of the designer's denim line at an intimate rooftop dinner at the Mondrian Soho in New York City. Ranging in price from $48 to $128, the collection features jeans, shorts, and slouchy worn-in shirts, all named after streets in Manhattan. Plus, for every piece sold a portion of the proceeds will be donated to the Share our Strength's No Kid Hungry Initiative. Shop the line at rebeccaminkoff.com.

took a family trip to London for the opening night of the musical version of Roald Dahl's Charlie and the Chocolate Factory in the West End.

posed with his animated character Turbo, a garden snail who dreams of winning the Indy 500, at the premiere of the new Dreamworks flick of the same name in Barcelona. The movie hits theaters July 13.

premiered their new action flick White House Down in New York City (Gyllenhaal in Christian Dior). The film is, which is about a cop who must save the President and the country from a group of paramilitary invaders, opens June 28.

introduced Gucci's new men's scent, Made to Measure, in Milan. The spicy Oriental fragrance is named after the company's made-to-measure customized suit service and will be available at Macy's in mid-July.

showed how good 50 looks when they attended the ceremony revealing producer Jerry Bruckheimer's Hollywood Walk of Fame Star in Hollywood.

journeyed down under to premiere Man of Steel in Sydney, Australia. The movie set records when it opened in America, raking in $196.7 million in the box office in opening weekend for the biggest June opening ever.

debuted their new comedy The Heat in New York City sponsored by C. Wonder. In the film, Bullock plays an uptight FBI agent who is forced to work alongside a testy local cop played by McCarthy in order to take down a ruthless drug lord. It opens nationwide June 28.

shared a moment on the red carpet at the premiere of their latest project The Way, Way Back. The buzzed about film is a coming-of-age story about a shy teenage boy who begins to open up after he strikes a friendship with a water park manager during his summer vacation. "It’s such an amazing film," Robb told InStyle.com at the premiere. "The script is so strong that it was such a joy to be a part of." The film opens nationwide July 5.

got some rest at the 24 Hour Plays after-party, held The Shore Hotel in Santa Monica. Earlier, the two joined Wilmer Valderrama, Jack McBrayer, Molly Sims, Melanie Griffith, Jason Biggs, and more to participate in the 3rd annual 24 Hour Plays event hosted by Montblanc, where they wrote, produced, and acted in plays all within 24 hours. The performance benefited Urban Arts Partnership in Los Angeles, an organization that supports the arts in underserved public schools. Learn more at urbanarts.org.

mingled as they honored Rob Stringer, the Chairman and CEO of Columbia Records, at a luncheon hosted by the UJA Federation of New York. 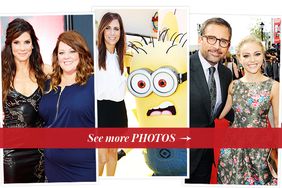