premiered their new film, 'Jack Ryan: Shadow Recruit' at the TCL Chinese Theatre in Hollywood. Pine takes on the role of the famous CIA analyst's shoes and Knightley (in Chanel) also joins him for the ride in this Tom Clancy thriller. The film opens in theaters everywhere on January 17.

celebrated her new single "Jiya" from the new Bollywood film 'Gunday' during the Paper Magazine party. The Guess spokesmodel was also joined by designer Prabal Gurung—who dressed her for the evening—at La Cenita in New York City.

attended the after party for the premiere of Groff's new HBO show, 'Looking' at Paramount Studios in Hollywood. Groff stars in the new series about gay men looking for love in San Francisco, which airs on HBO January 19th.

Drew Barrymore and Will Kopelman

"I'm so happy to see (the book)," Barrymore said to InStyle.com. "To me, some of the images in it are fifteen years old and to see it out in this sort of fresher context is like, 'Oh wow that's wonderful.'"

was one of the many guests that toasted Barrymore's book 'Find It In Everything' at the Chanel boutique in Beverly Hills. "I feel very, very honored to be here," Hough (in Chanel) said to InStyle.com.

"She is just loving and happy," said Witherspoon (in Chanel) about Barrymore. "She is just a genuinely grateful, happy person and this (book) is sort of the national extension of how talented and creative she is all the time."

stepped out in a stunning Reem Acra gown to attend the 2014 UNICEF Ball presented by Baccarat at the Beverly Wilshire Four Seasons Hotel. The evening honored Michael Douglas with the Danny Kaye Humanitarian Peace Award for his charitable efforts, along with a surprise award for Matt Damon's humanitarian work.

stepped out for Fox All-Star party to kick off the winter TCA Press Tour at the Langham Hotel in California. The 'New Girl' star (in Andrew Gn) joined her sister, Emily Deschanel, who also attended the event for her hit series 'Bones.'

attended the BAFTA Los Angeles 2014 Awards Seasons tea party at the Four Seasons Hotel in Beverly Hills wearing a button-up Michael Kors dress. "I picked it because it's a lovely red," the actress told InStyle.com. When asked if she was counterprogramming against her Golden Globe-nominated film, 'Blue Jasmine' she simply replied, "I suppose I am!"

looked flawless (in Emilio Pucci) at The Art of Elysium's Heaven Gala held at the Skirball Cultural Center. Camilla Belle, Steven Tyler, Teresa Palmer, and others were also in attendance.

made a date night out of The Art of Elysium gala presented by Mercedes-Benz. The couple joined Linda Perry and others inside the event.

was announced as SodaStream's first-ever global ambassador. The actress will demonstrate how to work the home soda-making system in the brand's latest commercial, which will air during the Super Bowl XLVIII. 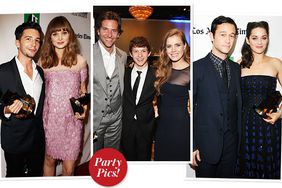