"I can't even concentrate, I called my friends to come over and try it on," Katie Holmes (in a Balenciaga dress and Tiffany & Co. jewels) gushed to InStyle.com about the 27-carat emerald cut blue sapphire weighing down her right ring finger at the Solomon R. Guggenheim Museum in New York City last night. If diamonds are a girl's best friend, then the stars were in good company all evening. Fashion luminaries and Hollywood's hottest actresses came out to commemorate Tiffany & Co.'s presentation of its 2014 Blue Book, which features the brand's most spectacular jewels.

In addition to showcasing the luxury brand's rare diamonds and precious gemstones, the soirée also featured a special one-night custom projection of "The Diamond Sky," a mapping installation by the Leo Kuelbs Collection, which was appropriately inspired by the Tiffany diamonds and new book. Other guests in attendance included Seth Meyers with wife Alexi Ashe, Nora Zehetner, Lindsay Ellingson, and Hilary Rhoda.

Click through our gallery to see photos of more celebrities at this week's hottest parties!

attended the world premiere of The Amazing Spider-Man 2 in London, England. The film, in which the real-life couple stars, hits theaters everywhere May 2, 2014.

made an appearance at the Los Angeles premiere of Transcendence, which she stars in alongside Johnny Depp and Morgan Freeman. The movie debuts everywhere April 17, 2014.

made it a family affair at the 2014 Kaleidoscope Ball in Beverly Hills, California. The annual fete benefits the UCLA Children's Discovery and Innovation Institute.

also got cozy at the Kaleidoscope Ball, where they helped raise funds for research and training activities to improve children's health locally, nationally, and globally.

celebrated at ASPCA's 17th Annual Bergh Ball Gala at the Plaza Hotel in New York City. Mizrahi acted as host for the night's event, which raised funds to protect abused and neglected animals.

celebrated the upcoming launch of Deschanel's line for the Tommy Hilfiger brand, sweetly titled "To Tommy, From Zooey" at The London West Hollywood. "When the possibility came up to create this collection, I was really excited," Deschanel (in a dress from the line) says. "I've been so lucky to get to work with Tommy."

feted the release of her latest book, Living In Style, at the Marc Jacobs store in West Hollywood where she signed copies and posed for photos with fans.

made a stylish appearance in H&M's Conscious Collection at the grand opening of the retailer's new store in Munich, Germany.

attended the Museum of the Moving Image's 28th Annual Salute in New York City, which honored Spacey for his talent and versatility in a wide range of memorable and award-winning roles as well as his accomplishments as an executive producer and director.

showed off her edgy side at the FX Networks Upfront screening in New York City of Fargo, a new television series set to premiere on April 15, 2014.

attended the premiere of Cuoco's latest film Authors Anonymous in Los Angeles, which is available on demand now and will hit select theaters April 18, 2014.

came out to an intimate dinner celebrating the 5th anniversary of Katrantzou's namesake brand and their launch of US e-commerce, hosted by the designer herself and MAC Cosmetics at Indochine in New York City.

celebrated at the launch of the Kate Hudson LBD Collection for Ann Taylor last night at the Chateau Marmont Hotel in West Hollywood, California. "I really do like working with Ann Taylor because you're really designing with every woman in mind," Hudson tells InStyle. "You really want every woman to appreciate it and to feel comfortable in it, which I think is really important."

made an appearance at a political fundraising event at the Kayne Griffin Corcoran Gallery in Los Angeles, California.

also attended the political fundraiser, where she debuted her new "slime green" locks for the first time in public. Perry looked ready for spring in a Suno cutout floral dress.

were the most stunning trio ever as they celebrated Hollywood's up-and-coming female faces at a party hosted by Marie Claire.

attended the New York City premiere of her upcoming film Hateship Loveship, which was hosted by the Cinema Society and Montblanc at the Museum of Modern Art. The movie hits theaters April 11, 2014.

got cozy at the 2014 Room To Grow Gala in New York City, which raises funds to help enrich the lives of children born into poverty.

attended the London premiere of their movie Half Of A Yellow Sun, which comes to theaters later this summer.

were an adorable duo at the premiere of their movie The Other Woman in Munich, Germany. The film will be in theaters everywhere April 25, 2014.

celebrated at the Los Angeles premiere of Draft Day in a chic Max Mara jumpsuit. Garner stars in the film about the NFL Draft alongside Kevin Costner, which hits theaters April 11, 2014.

cozied up at the Point Foundation's Point Honors New York Gala held at the New York Public Library. Rannells presented his Girls costar with the Point Horizon Award, which Dunham received for being a champion of the LGBTQ community.

attended the Alliance For Children's Rights 22nd annual dinner at The Beverly Hilton Hotel in Beverly Hills, California. The event raised money to ensure that underserved children have safe and stable homes, healthcare, and the education they need to thrive.

also lent their support at the Alliance For Children's Rights 22nd annual dinner, where Shriver acted as an honorary co-chair.

celebrated at the 5th Annual DVF Awards at the United Nations building in New York City, which honored six women who have inspired others through their life's work. "Their work is inspired and imaginative. It's just a thrill that I get to be here," Parker (in DVF) tells InStyle. "I want the world to remember that women are part of the solution. The more we put women in power, the stronger the world will be," von Furstenberg (in her own designs) says.

were each honored at the 5th Annual DVF Awards. Steinem with the Lifetime Leadership Award and Keys (in DVF) with the Inspiration Award. Both received $50,000 grants along with their award to benefit a chosen non-profit organization. "It's both a recognition of the past and an empowerment for the future," Steinem tells InStyle. "I can use this to empower women in another country."

also attended the the 5th Annual DVF Awards and InStyle's champagne cocktail party before the event. "I'm here today to support the amazing women who have had the courage to fight and power to survive," Iman (in DVF) tells InStyle.

showed off their baby bumps at the Safe Kids Day event in Los Angeles, an organization that works to prevent childhood injuries.

were fashionable friends at the 3rd Annual Reel Stories, Real Lives event benefiting The Motion Picture & Television Fund in Hollywood, California. Schilling (in Roksanda Ilincic) and Hathaway (in Paule Ka) were joined by Joseph Gordon-Levitt, Andy Samberg, and Will Arnett at the event.

made an appearance at City Tavern Downtown LA, which recently opened at the FIGat7th center in Los Angeles. The former Vampire Diaries co-stars caught up at the new spot.

made an appearance at the 2014 Light Up The Blues Concert held at the Ace Hotel in Los Angeles. Shepard and Bell (in Alberta Ferretti) made a stylish pair at the concert, which benefits Autism Speaks, an organization that performs research and advocacy efforts for families and individuals impacted by the disorder. 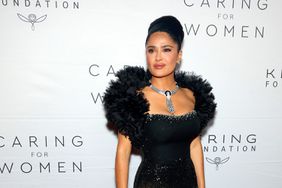