(in Saint Laurent) posed with one of night's co-host's Daily Beast editor-in-chief Tina Brown during the first day of the 2013 Women in the World Summit, an annual event sponsored by the Women in the World Foundation and held at New York City's Lincoln Center. After an evening filled with inspirational performances and speeches, Jolie closed out the night by pledging $200,000 to the Malala Fund, a Pakistani education initiative started by Malala Youstafzai, the 15-year-old who received international attention after she was shot by the Taliban for her outspoken support of equal education.

, who co-founded FEED, a non-profit organization which creates products such as bag, t-shirts, and other accessories to benefit the United Nations World Food Programme, helped host the 2013 Women in the World Summit alongside other powerful ladies such as Tina Brown and Diane von Furstenberg.

Former Gossip Girl star Penn Badgley attended the launch of HampM's Conscious Collection, a line of partywear and accessories for both men and women made from sustainable materials such as organic cotton and recycled polyester. For the spring collection HampM designers were inspired by Old Hollywood Glamour. "Rich in detail and eloquent design, the collection is full of dramatic gowns and sharp tailoring for women, and a rock-and-roll red carpet style for men," Catarina Midby, HampM's Head of Fashion and Sustainability Communication told InStyle.com.

attended the Paul Newman's SeriousFun Children's Network benefit at New York's Chelsea Piers. Clinton presented the evening's honor to lobbyist Liz Robbins, who has been instrumental in helping establish Paul Newman's SeriousFun Children's Network over seas. She was joined on stage by parents Bill and Hillary. The organization provides children struggling with serious illness an opportunity to go to summer camp.

put on a happy face at the FABB West event at SLS Hotel in Beverly Hills. The Fashion and Beauty Blogger conference included an on-stage panel, which Barrymore, who has her own line of beauty products, partook of.

Christa B. Allen and Julianne Hough

Actresses Christa B. Allen (in Alice + Olivia) and Julianne Hough (in Carolina Herrera) attended the FABB West Blogging Conference at the SLS Hotel in Beverly Hills.

Jada Pinkett and Will Smith

and wife Jada Pinkett (in Miu Miu) had a very special date night in New York last night; the couple attended the premiere of activitist Angela Davis's film Free Angela and All Political Prisoners, held at The Schomburg Center for Research in Black Culture in Harlem. The documentary tells the story of Angela's life, and how she started out as a young college professor whose social activist implicated her in a botched kidnapping that lands her on the FBI's 10 Most Wanted list.

and Olga Kurylenko (in Roland Mouret) continued their world tour in support of their futuristic action thriller Oblivion, making a stop in Dublin.

(in an Isabel Marant dress and Michael Kors booties) signed copies of her new cookbook It's All Good: Delicious, Easy Recipes that Will Make You Look Good and Feel Great at the Barnes & Noble at The Grove in Los Angeles.

helped L'Oreal Paris celebrate the Top Ten College Women at an event held at Barnard College's The Diana Center in New York. The winners were chosen by reader votes, and the contest has been going on for 55 years.

The stars of Danny Boyle's latest film Trance posed with the director at the movie's New York premiere, hosted by The Cinema Society and Montblanc. For the film, Dawson plays a hypnotherapist assigned to a dangerous case involving a gangster and fine art theft. To get into character, she created a voice and recorded herself to practice. "I remember putting a tape in and my friend listening to it as we were driving out to Sunday dinner, and she started wobbling on the highway," Dawson (in Bottega Veneta) said at the premiere. "And I was like, either I'm boring you or this is working!"

Emmy Rossum (in Naeem Khan) posed with designer Jeffrey Kalinsky and his brand's 10th Anniversary Jeffrey Cares Fashion Celebration, held at New York's The Intrepid. The initiative was first established in 1992 in Atlanta, to heighten awareness of the plight of people living with HIV/AIDS and members of the LGBTQ community.

New York Yankee baseball player Robinson Cano posed with Angel Jessica Hart at a celebration of the launch of the Victoria's Secret Pink MLB Collection in the lingerie brand's Soho store in New York. The collection allows baseball fans to shop tanks, hats, shorts, and more, all categorized by team.

It was a true Sleepless in Seattle/You've Got Mail reunion last night in New York, where Meg Ryan came out to support Tom Hanks as he feted the premiere of his Broadway play Lucky Guy. Ryan and Hanks got their start playing opposite each other in the quirky romantic comedies penned by the late Nora Ephron, a legacy that Hanks continues in his current starring role. Ephron penned the play, which tells the true story of tabloid journalist Mike McAlaray, who won the Pulitzer Prize shortly before his untimely death.

Shia LaBeouf and the cast of The Company You Keep

Shia LaBeouf and his scruffy facial hair stopped by the after-party for The Company You Keep premiere in New York. LaBeouf mingled with his co-stars Brit Marling (in Andrew Gn) and Jackie Evancho, and saluted Hollywood legend Robert Redford. The movie is a thriller about an underground activist who goes on the run when a journalist finds out his true identity.

Emmy Rossum celebrated after singing the National Anthem for the New York Mets 2013 baseball season opening game with the mascot of the hour, Mr. Met.

Author Kelly Oxford had pal Olivia Wilde (in Max Studio) co-host the launch of her book, Everything is Perfect When You're a Liar ($26 at amazon.com), at Housing Works in New York City.

Brooke Shields attended the opening reception for Sante D'Orazio's Other Graces exhibit at Christie's in New York. The exhibition, open through April 19, focuses on large-scale photographs taken over the artist's 20-year career, including shots of iconic celebrities.

Tom Cruise continued his world tour in support of his latest film Oblivion, making a stop in Moscow, Russia alongside co-star Olga Kurylenko (in Stella McCartney). The movie, which opens in the U.S. April 19, puts Cruise in another action-packed role as Jack Harper, who is assigned to re-visit an abandoned Planet Earth to extract what resources remain. But once he's there, he discovers the world isn't quite as abandoned as everyone assumed.

Bromance was the theme of Gerard Butler and Aaron Eckhart's evening in Moscow, as the two attended the Russian premiere of their film Olympus Has Fallen.

The world always needs saving, and Superman is never too far away! Matt Bomer attended the WonderCon Convetion in Anaheim, California to support his voiceover as the world's greatest superhero in Superman Unbound, which comes out May 7. 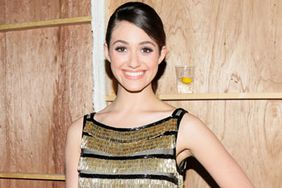