Congratulations are in order for Olivia Wilde and her funnyman fiancé Jason Sudeikis. The actress announced via Twitter last night that she has given birth to her first son. "Ladies and gentlemen, Otis Alexander Sudeikis has LEFT the building! (I'm the building)," Wilde tweeted from her personal account, sharing an adorable photo of herself with her new pride and joy.

Ever since last fall when we learned that Wilde was expecting, we haven't been able to take our eyes off Wilde's maternity style. From body-hugging dresses to slim-fit separates throughout her pregnancy, the glowing star always looked flawless throughout her pregnancy. Take a look at Wilde's most stylish maternity looks through these past 9 months–both on the red carpet and off.

Wilde's first appearance after announcing her pregnancy was at the International Women's Media Foundation's Courage in Journalism Awards in Beverly Hills. The actress wore a Cushnie Et Ochs dress and Jimmy Choo heels. On October 27, she tweeted her appreciation for her fans' support of her pregnancy, saying, "WOW. You guys are awesome. So kind. Thank you thank you thank you! PS. Babies eat mostly salsa right?"

For the LACMA Art + Film Gala in Los Angeles, Wilde hid her baby bump in a flowing black Gucci gown, which she paired with loose waves, bright pink lips, and a metallic clutch. "She is a combination of everything that I love about women," fiance Jason Sudeikis said in InStyle's August 2013 issue. "She's smart, strong, caring, beautiful, and as funny as anybody I've ever known. She just has it all."

Wilde stepped out in Los Angeles wearing a pastel suit, a T-shirt that reads, "Love is my religion," black and nude heels, and a black handbag. The actress is no stranger to attention-grabbing pantsuits: She donned a black Gucci pantsuit sans blouse earlier that year for the premiere of her film Rush. The ensemble landed her on countless best dressed lists.

No baggy shirts or muumuus for this mom-to-be. The actress wore a body-hugging blue David Koma dress with silver metallic accents for the Los Angeles premiere of her movie Her.

For an appearance on The Tonight Show with Jay Leno to promote her film Her, Wilde looked radiant in a black Tocca dress with black Casadei heels.

A patterned Gucci LBD, black moto jacket, black tights, Jennifer Meyer earrings, and black Brian Atwood pumps for the actress at a Golden Globes party held at the Chateau Marmont in West Hollywood. Further proving that being pregnant doesn't mean your outfits have to be boring, Wilde made good use of her edgy black moto jacket well into her pregnancy.

Another day, another Gucci dress. Wilde wore a long-sleeve green sequined gown by the designer for the 71st annual Golden Globes in Los Angeles. On the red carpet that night, she and Sudeikis revealed that they are having a boy and he is due on May 4th.

While out and about in Hollywood, Wilde went for a casual but still stylish look, pairing jeans and a T-shirt with a patterned scarf. A month later, she joked about her growing belly when she posted a photo of herself to Instagram with the caption, "Sure I've looked like this after Mexican food but this time it's a BABY."

"We are wearing Valentino and Lorraine Schwartz," the glowing mom-to-be told Ryan Seacrest on the Oscars red carpet, referring to her and her baby bump. According to Wilde's Twitter account, trying on her gown for the night might not have been the most fun experience. On February 19, she tweeted a photo of Homer Simpson with the caption, "Pic from my Oscar fitting." After the awards show, the Twitter-happy star posted a photo of Sudeikis getting In-N-Out from the drive-through window with the caption, "Post Oscars fancy feast. This man is our hero."

For a stroll with her 10-year-old, 50-pound mutt, Paco, Wilde bundled up in jeans, a black coat, a black scarf, and black sneakers. In 2011, the actress referred to her loyal four-legged companion as her boyfriend.

Only a month away from her due date, the actress was in Boston where her fiance was filming scenes for his new film. Wilde's black coat made a repeat appearance, this time paired with jeans a plaid shirt. "I've never been so hapy to just be happy. I'm going to to try to drag it out forever," she said of her engagement in InStyle's August 2013 issue.

A Revlon spokesmodel, Wilde wore a custom black gown with sheer sleeves, a swept back hairdo, and a smokey eye for the 2014 Revlon Concert for the Rainforest Fund. 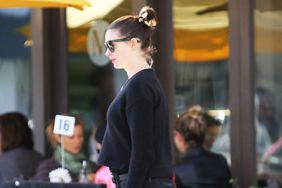