The week after announcing her pregnancy, Alba ran errands in style in a Couture Couture coat and gray Coach boots. "I've always wanted to be a mother," Alba told People. "This couldn't have happened at a better time in my life. I feel super-blessed."

Alba flashed a smile during a walk in Beverly Hills dressed in a comfortable terry hoodie from 1 in the Oven, a Sir Alistair Raj scarf and a quilted Chanel bag. Of her pregnancy, she told People: It's more like something has taken over my body, and you have to just surrender and allow your body to do what it needs to do. It's the most incredible thing in the world, but at the same time it's very emotional and bizarre."

GET JESSICA'S HOODIE ONLINE NOW
1 in the Oven terry hoodie, $74; at 1intheoven.com.

"If you guys don't know, I'm pregnant," Alba joked to the star-studded audience at a Glamour-hosted luncheon in honor of V-Day. "I hope [my dress] won't pop while I'm up here. And if it does, you're all women, and I think you'll understand it. [When you're pregnant], your breasts are engorged and your stomach is getting bigger..." Alba made the most of her new body in a pink print dress from Dior by John Galliano.

For a day in Beverly Hills, the star wore a flawless cold-weather outfit: a cashmere Linq tunic, knee-high boots and a scarf wound around her neck. The still-svelte star told People that she is enjoyed the weight gain. "It doesn't feel weird, it feels normal," she told People. "Gaining weight is natural and it's what's needed for the baby."

Alba looked casually cool in a Gold Hawk top over skinny jeans. When asked how her Fantastic Four character, Invisible Woman, would handle a pregnancy, she told MTV: "I think she'd be pretty funny about it, definitely [have] a good sense of humor about it. And you kinda do when you're pregnant. You kinda have to laugh at it and surrender a bit, because your body's being taken over by this other thing completely."

The beauty looked sleek in a floor-length Gucci gown in marigold and black. "It's a bit goddesslike," she told In Style. "It's jersey, comfortable and elegant, with a little rock and roll in the shoulder. It's got that big buckle, which is a signature Gucci thing."

"I like to dress up for you," Alba told David Letterman of her red Dior frock. The star told Letterman that her first trimester was "hairy. amp#91;Your body isamp#93; expanding in places. It's like, 'What's going on here?'"

The star hit MTV's TRL in a flirty shoulder-baring dress from Gold Hawk. On the program, she admitted that she had been brainstorming names: "We're thinking of some, but I think when you see the baby, it all changes."

In a navy Narciso Rodriguez dress, Alba proved that a non-maternity dress can be a perfect fit for an expectant mom. "She loves to show that little tummy off!" pal Valarie Rae Miller told People. "She likes to pull up her shirt and push it out so it looks even bigger. She's really embracing her new, rounder body."

A feather-trimmed gown from Marchesa played up her new shape. "I'm finally enjoying being pregnant," Alba told People during her second trimester. "And I'm finally showing! I can't wait to have a really big belly."

"I'm in my third trimester now," Alba told Ryan Seacrest at the Academy Awards. As for the due date? "I'm kind of keeping that a secret." Not such a secret was this mom-to-be's glow in her Marchesa gown and Cartier gems.

Alba took style cues from her own mother when she attended the reopening of the Paris Fendi store. "My mom's first designer purse was a Fendi purse and it was her prized possession," she told Fashion Week Daily. "We didn't have a lot of money and it was the only designer thing we had in the house for years."

A belt on a bump? Alba added interest to her gray Lanvin gown with a brown leather cincher. The actress sat front row at the Fall 2008 Lanvin fashion show in Paris.

Alba looked perfectly Parisian in a long, jeweled Temperley London gown at the French premiere of The Eye. Her appetite was equally en Francais. "Every day I have eaten ham and cheese sandwiches, I can't get enough of them," she wrote on her MySpace blog. "The little one must like the food too, because it is moving and kicking like crazy."

Alba chose an off-the-rack maxidress from Corey Lynn Calter for the Kids' Choice Awards. Of borrowing from designers, Alba told us: "Dresses aren't quite the same. When you're pregnant, you can't wear sample sizes unless they're roomy."

For a London photo call, Alba slipped into a comfy embroidered Thomas Wylde shirt. She told In Style she favors, "longer shirts and lots of leggings because they're just more comfortable." 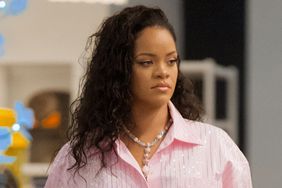