First things first: Blake Lively is a style icon. This is the women who manages to change her outfit multiple times per day — with each look better than the last — while promoting her movies and other projects. She's also the woman who doesn't hold back when it comes to maternity style, which is why we're extra excited that the star is expecting baby number three with husband Ryan Reynolds. Between sexy cutouts, leggy mini dresses, and curve-hugging designs, she's styled her bump in it all, and, judging from the gown she wore at the Pokémon Detective Pikachu premiere, she's doing more of the same thing time around.

Currently, we're crossing our fingers that Blake won't shy away from the spotlight over the next few months and is ready to serve us even more stylish moments. Until then, we're looking back at the actresses and soon-to-be mom of three's best maternity outfits.

For the premiere Pokémon Detective Pikachu, Blake surprised us all by showing up with a baby bump. Her look for the night — a sequined, yellow Retrofête dress that came complete with a sash — perfectly hugged her growing belly, proving, once again, this star knows how to master maternity style.

Back when Blake was expecting baby number two, she had her own movie to promote, AKA The Shallows. This meant glam outfit after glam outfit, including this flowy floral dress by Lindsey Thornburg.

Never one to shy away from a daring dress, Blake showed some skin with this strappy Emanuel Ungaro number.

The actress kept in short and sweet on the red carpet, wearing Carolina Herrera.

Pretty, patterned, and perfect for the warmer weather. Plus, the tie on this Valentino maxi helped to accentuate Blake's bump.

Sometimes, fashion is all about experimenting, and Blake definitely thought outside the box when she layered these DVF dresses.

Blake showed off her legs — and a single shoulder — in this David Koma mini, which she wore to the after party for The Shallows.

The star definitely prefers to dress her bump in bright colors, like she did with this Jonathan Simkhai dress.

Poufy! Sexy! Fun! Blake's Carolina Herrera gown was all the things at The Shallows premiere.

Yes, a denim jacket can be worn over a gorgeous gown. Blake proved this to be true when she layered her Madewell option over a chiffon Jenny Pakham dress.

A naked maternity dress? You bet. This embellished Elie Saab number was slightly sheer, and Blake styled it with some silver shoes.

Elsa, is that you? Blake definitely gave off Frozen vibes while walking the Cannes red carpet in Atelier Versace.

Cold weather couldn't stop Blake from being stylish! During her first pregnancy, the actress ran around NYC in layered plaid jackets, black skinny pants, knee-high boots, topping things off with the help of a newsboy cap.

Yep — Blake did wear leather pants while pregnant with her first child. She paired them with a slate colored sweater, a fur-trimmed Alicia Adams cape, stiletto booties, and a Céline trapeze bag (#tbt).

Another day, another A+ look. This time, Blake kept it casual in skinny jeans, a striped Amour Vert top, and a Gucci coat. She accessorized with black booties, and embraced Pantone's 2015 color of the year — AKA marsala — with her bag.

Blake was clearly on the go, but still looked great with her skinny jeans, heeled booties, and cape, which she topped off with a long pendant necklace.

At L'Oreal's Women of Worth Event in New York City, Blake stunned in a sexy black backless gown that showed off her belly, and made sure to add diamond drop earrings and a bunch of bangles.

Blake was snapped en route to the Martha Stewart American Made Summit wearing a white knit and a matching midi skirt with daisy appliqués, both by Michael Kors. For accessories, she smartly selected vibrant turquoise beaded strands and blush pink pumps for a dose of color, and finished things off with a boucle coat nonchalantly draped over her shoulders.

Blake made sure this bold, black and scarlet Lindsey Thornburg cloak matched her lipstick, and tucked her black jeans into her slouchy boots.

Blake's baby-bump-hugging, yellow Gucci gown is now considered iconic, thanks to the winning combination of embellishments and a plunging neckline.

Blake and her Sisterhood of the Traveling Pants costar Amber Tamblyn attended the opening of Travis Louie's art exhibit in New York City, where the star wore an Otis and Maclain skirt, a printed Michelle Kim blouse, and a Thomas Sires coat, which she styled with studded pumps and a red clutch.

Look at that puppy-print! Blake stepped out in a matching set, styling her statement-making look with metallic heels, an oxblood coat, and a cozy heather gray scarf.

Blake dared to mix prints with her Michelle Kim skirt and a plaid Loup top.

At her first red carpet appearance since announcing she and husband Ryan Reynolds were expecting their first child, Blake showed off her growing belly in a figure-hugging Michael Kors gown. 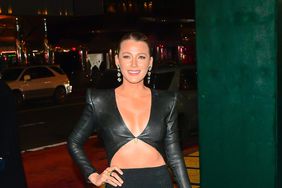 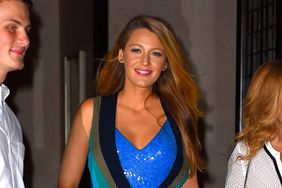