If you're wondering what new trend to try, you might want to take a cue from Hollywood and adopt the latest A-list fashion favorite—going braless.

Yes, you read that correctly. Street style stars and celebrities alike have been leaving their bras at home, and fashion feels just like a '90s episode of Friends again.

The look started popping up more and more as the weather warmed up, but now it's a full blown trend. Scroll through some of our favorite braless looks that have graced the red carpets, sidewalks, and runways so far this season, and try to pick just one favorite.

The singer put a chic twist on the bare trend. While out in London, Gomez wore a black sheer turtleneck (sans bra) with a patterned coat and orange-red heels for a pop of color.

The model took a break from walking in Paris Fashion Week to sport an old school Parisian style with—you guessed it—no bra in sight. Hadid wore a black beret and patterned jacket while leaving her bra by the wayside. Trés chic!

EmRata stepped out in what might be her most daring top yet. The model went braless in a shirt held together by two small strings, pairing the blouse with high-waist jeans and red statement boots.

Gomez was spotted in N.Y.C. in a bright yellow top and no bra in sight. The singer is currently filming a Woody Allen movie, where she's given some pretty steamy kisses to her cute co-star. If the kiss isn't enough to obsess over, this cute look certainly is.

Kendall Jenner stepped out in New York City rocking not one but two of summer's hottest trends: the no-bra look and a fanny pack. For the outing, she chose a sheer long sleeve black floral top with high-waisted cut off shorts and small gold-rimmed sunglasses.

The reality star abandoned is never afraid to show some skin or to embrace a hot new trend. During a recent outing in N.Y.C. with her assistant Steph Shepherd, Kim wore a see-through ribbed tank, track pants, and white sneakers.

The British songstress wore an all-black outfit—sans bra—while out and about. It just goes to show that not wearing a bra doesn't mean you have to change up the rest of your look at all.

As an internationally renowned singer and style icon, Gomez seems to choose her outfits carefully, so when she wears a trend, you know it'll be "in" for awhile. Even though the weather hasn't been warm for very long, the singer has already gone braless more than once, leading us to wonder if she's thrown away all her bras.

Cyrus can't stop, and she won't stop—ditching her bras, that is. The singer has left her bra by the wayside more times than most, and that doesn't seem to be changing anytime soon.

Nobody pulls off the braless look quite like this supermodel. Whether she's jetting off to Paris or looking positively regal on a red carpet, Hadid manages to remain stylish and polished, whether she's wearing a bra or not.

This model is an expert at pairing fashion fads with key basics, so when she went braless in a girly white dress and boots, it was nothing short of quintessential Kendall.

The singer is having a great year, having just become the first female artist to top the Billboard 200 album chart in 2017, so why not celebrate with fashion choices that are also on-trend?

Kardashian has been freeing the nipple for years, and that hasn't stopped recently. The reality star is an expert at creating stylish outfits that do not require typical bras, so of course she's on trend yet again.

The Anti singer has been going braless in some of her looks since last year (when we asked why nobody was wearing bras anymore), and she's bringing the braless look back for another season.

Depp may be a young up-and-comer on the fashion scene, so she's the perfect person to get style inspiration from. Depp has left her bra at home while walking red carpets and running casual errands, and she looked great while doing it.

Winter is not shy about wearing revealing outfits. The Modern Family actress went braless on a recent red carpet for the show. 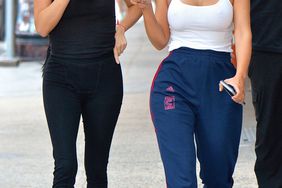 Kim Kardashian West Jumps on the Braless Bandwagon in N.Y.C.