The face of 7 For All Mankind — and Only Murders in the Building’s newest cast member — tells InStyle about her days pretending to be a spy, and why she’ll never part with her oldest pair of jeans, even though they’re falling apart.

If Cara Delevingne weren't real, Quentin Tarantino would have made her up. She has the ferocity of a lion and a finger tattoo of one, too. She's fiercely unfiltered in interviews, but steely and focused onscreen, exuding the kind of cool that every brand tries to sell, but nobody can actually buy. Her eyes have their own gravitational pull, and everyone can spell her name correctly, because everyone wants to pretend they're in her scene.

Lately, Delevingne's orbit has gotten even bigger. First, with some "wait, what?" antics like partying onstage with New York mayor Eric Adams, and next, with an upcoming turn in Only Murders in the Building and a new campaign with 7 For All Mankind. The brand also partnered with 29-year-old on donating to The Trevor Project, Feeding America, and other orgs, which were hand-picked by the actress herself to support the greater good.

Still, even with so much on her plate, Delevingne wasn't too busy to chat with InStyle — about her recent New York moments, newest gigs, and all things denim. Ahead, she declares her love for skinny jeans and reveals what she'd put in her personal Hall of Fame.

Hi! I heard you're under the weather; are you okay?

"I'm great. I've been a little tired because I got a booster shot and I felt like crap. But apart from that, I'm feeling great. Honestly. I'm really loving my life right now. I feel really, really good, actually. I'm really happy to be back in New York shooting Only Murders in the Building. I love it here so much; I really think I'm going to be moving here soon. Life is great."

I'm moving, too! Should I keep my skinny jeans or are they dead?

"Do not get rid of them! Oh my gosh, no, they are definitely not dead. Look, I'm English, right? I'm from London. I will always be obsessed with looking like Sienna Miller back in the boho days, with skinny jeans and boots, light or dark, doesn't matter. Do not get rid of those if you have them. But I will say, working with 7 [For All Mankind], my knowledge of jeans grew a lot more in terms of cut and fabric. I have a lot more of a love of bootcut now, and flares… but I don't think anything needs to go 'out' of fashion, you know? I think that's a very dated way to look at fashion. It's much cooler to just wear what feels comfortable to you, whether it's like a '70s flare or a Y2k low rise. But skinny jeans will never die!"

Some people never wash their jeans — like, I have a friend who puts theirs in the freezer. Do you?

"No, but I'll wait like a week, which is a long time for me. Normally I throw things in the wash right away, but if I'm filming, if I'm recording, if I'm running around, then I will probably just pick them up off the floor and wear them right again."

In the 7 For All Mankind ads, you pose in a denim jacket with nothing underneath. I would love to pose like that, but my boobs don't always behave. Help?

"HA! I don't know. I think with shots like that, you either have to take it yourself or be with someone who makes you feel really comfortable. I have so many friends of mine always asking, 'How do you model this? How do you go braless?' And it's just like, the embarrassing thing is the truth: If you want to model, you're going and standing in front of the mirror and being like, 'Well that's a nice angle for my face. That's a nice angle for this other part.' It's pathetic and it sounds narcissistic as f*ck, but also, it's just fun! Like, have fun with it. You know, part of why I still model is because I love photography, and I think photography is a really wonderful way of expressing yourself, and also being behind the camera makes you feel very empowered. Collaborating with a photographer can be very powerful, too. So just have fun; don't make it a pressure-filled situation and don't have a goal. Just take a bunch of photos and there might be some which are really natural… You know, when I'm working on set, sometimes I laugh too much, because I think the whole job is so crazy and I can't believe I'm getting paid to do it."

Do you have a favorite pair of jeans that you've worn as a costume?

"As a costume! Oh, I don't know… but I do have a favorite pair of jeans from a long time ago. So, I used to have this pair of jeans when I was really young, which I wore while I was still growing into them. And so they're really ripped. I still have them, and they're ripped completely around the knees and then around the crotch. The rip comes from, like, the bum all the way up to the front. And there's just like a seam in the middle [still left]. That's not a costume. It's just I've had them forever, and sometimes I still try to put them on, just to see, but they're so tight and so small! I should really put them in a cupboard, but I can't bear to do it, because I mean, I've definitely probably had sex in those jeans! I have so many memories in them… I should probably put them in some sort of Hall of Fame."

Can I ask your advice? If I have an ex's pair of jeans, do I have to return them, even if they look better on me?

"No, absolutely not. They are yours. And that's it. Yours. You know, at least you can have something when you go through a breakup! I think that there is stuff that has to be left behind, obviously. I think like jewelry and stuff like that. But like, jeans? No. Keep them. Especially if you look great in them."

I know you can't reveal anything major about Only Murders in the Building, but in real life, could you solve a murder?

"Oh, in real life? Yes. Yeah, absolutely. I was very, very into being a spy when I was younger and I'm still very observant about the weirdest things… For instance, I tend to look at footprints. Seriously, I was at a friend's place the other day, and there was a boot mark on the floor. And I was like, 'Hey, is someone else here or are your feet that big? Did you have company, because that shoe looks too big for you!' She was like, 'Cara, that's really creepy.' Is it? I don't know… But yes, in real life, I think I would absolutely be able to solve a murder." 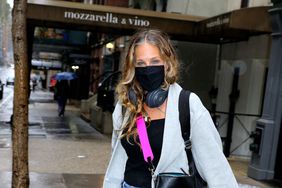 Sarah Jessica Parker and Fashion Editors Agree: These Flattering Jeans Are a Must 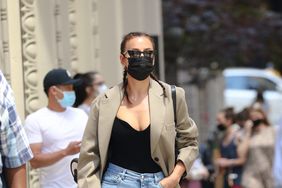