The actress has producing ambitions.

There’s no standing in the way of rising talent Camila Mendes.

Why She’s a Badass: Since booking her breakout role as precocious teenager Veronica Lodge on the CW hit Riverdale four years ago, the 25-year-old actress has become a bold voice for her generation. “I hold myself to a higher standard now because I know that young people are influenced by almost every decision I make,” she says. “What kind of person do I want to be for that person, for that fan?” As a role model, Mendes feels an inherent responsibility to be open about her body-image issues and encourages her many fans (21.5 million on Instagram alone) to get the help they need from organizations like Project HEAL. The Brazilian-American beauty is also using her powerful voice and position to become a producer so that more stories celebrating Latin culture can be heard. “The Latinx community needs a Crazy Rich Asians moment,” she says. “And we’re going to get it.”

Mama’s Girl: Mendes looks to her mom, Gisele, for inspiration. “During any adversity that [my mom] has been through, she’s maintained this consistent state of happiness,” the actress says. “[Through her example] I’ve learned that positive people attract positive people, and if you’re happy with yourself, you become a better person who’s able to live a truthful, authentic life.”

Power Through Though she has a strong social-media presence, not all the messages she receives are friendly. But Mendes, who is the face of Secret deodorant’s All Strength, No Sweat campaign, takes it all in stride. “It requires a lot of patience to deal with hate online,” she says. Her feeds showcase sleek editorial shoots, pictures of her new rescue pup, Truffle, as well as posts about registering to vote and supporting Latina Equal Pay Day. “At the end of the day, if people are going on social media to spread hate, then I don’t respect them. So why would I care what they say about me?”

Dance It Out: Whether she’s dancing the night away, working out, or simply listening to her latest obsession, Tinashe’s Songs for You album, Mendes is always seeking out the perfect soundtrack to suit her mood. “I feel like [Songs for You] is a breakup album because the lyrics are so vulnerable, but Tinashe is flexing at the same time, and that’s cool,” she says. “Music, to me, is an escape. If it resonates with everything I’m feeling in that moment, I feel confident, comforted, and aligned.”

Stand Tall: A little over a year ago, when her body-image issues started to overwhelm her, Mendes took charge by going to a therapist and a nutritionist to get herself back on track. “I knew I wasn’t taking care of myself, and that would have me feeling insecure,” she says. “Now I don’t have that same anxiety I used to about food and my body. And I’m not putting all my self-worth in my appearance. There’s so much more to life than that.” 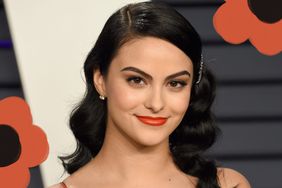