She shared an inspiring message of self-love on TikTok.

It's sometimes easy to forget that celebrities are human with imperfections just like the rest of us. Reminding everyone of this fact, Camila Cabello shut down her body-shamers after she was spotted wearing a sports bra that exposed her stomach during a recent run in Los Angeles.

In a video posted to TikTok, titled "I luv my body," the singer unapologetically embraced her figure — "curves, cellulite, stretch marks" and all in an act of self-love. "I was just running in the park minding my own business trying to be fit, trying to keep it healthy and I am wearing a top that shows my belly, and I wasn't tucking it in," Camila began, before panning down the camera to show off her bare midriff.

Switching over to a more sassy tone, she went on to explain: "I wasn't tucking it in, because I was running. And existing. Like a normal person that doesn't tuck it in all the time." Cabello added that the paparazzi photos initially made her second-guess her self image, but then she remembered, "being at war with your body is so last season."

She concluded, "I am grateful for this body that lets me do what I need to do. We are real women with curves and cellulite and stretch marks and fat. And we gotta own that, baby." Ending the clip on silly note, Cabello ran her red manicured hand up her torso singing the chorus of Aretha Franklin's "Something He Can Feel."

Last year, Camila's boyfriend, Shawn Mendes, revealed that she helped him overcome his own body image issues during an interview with British GQ. "Some days I would have three hours of sleep, [because] I'd get up two hours early just to be able to work out," Mendes revealed to the publication, adding that Cabello was instrumental in boosting his self-esteem. "[She is] so strong, so clear and confident with her [body] and so articulate and empathetic about other people's and it really changed my view of mine," he said. "It really changed my life." 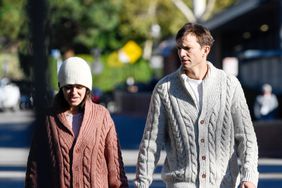