The duets write themselves.

It seems like a real-life love song: two singers find love, people assume it's all about publicity, and they prove everyone wrong. That almost sums up Camila Cabello and Shawn Mendes's relationship, but that would leave out the duets, the PDA, and the steamy MTV VMAs performance. From the initial case of mistaken identity to the quarantine walks, this is how #Shawmila got from opening acts to headlining their own romance.

Mendes and Cabello's former band, Fifth Harmony, open for Austin Mahone. According to Cabello, Mendes wasn't the warmest tour companion, but she managed to make a good impression.

"I remember thinking we met on the Austin Mahone tour, and I remember I wanted to hang out with you, but you were always on the tour bus, just learning guitar," Cabello told V Magazine.

Mendes offered his take on that situation, saying, "Yeah, that was me. I didn't talk to anybody. You were the only person that talked to me. Like, you were the only one of everybody on that tour who would say words to me."

"I thought you were out of your mind," he added. "I'd be in my bus where no one could see me. I'd be looking through the window and I'd see you, like, flying around on a scooter and jumping and doing cartwheels. I'd be like, 'She's insane. Close the window and go to sleep.'"

The two release their first duet: "I Know What You Did Last Summer." In an interview, they explained that they wrote the song together while touring with Taylor Swift during her 1989 tour.

"We were just backstage hanging out,” Mendes told Rolling Stone. "I pulled out my guitar and we were just messing around, not really thinking about writing a song."

It's not an official single, but Mendes and Cabello post a video of themselves covering Ed Sheeran's "Kiss Me."

Camila Cabello Wants You to Stop Waiting for the Perfect Bangs

The two still aren't official, but Mendes gushes about Cabello on Twitter.

"Speechless .. goosebumps all over. You’re incredible," he wrote on a post celebrating her song "Crying in the Club."

It's Cabello's turn to spread the love online. "I shouldn't be crying at this time in the morning but I AM," she tweeted as she shared Mendes's interview on Beats 1. "I love you SO much @ShawnMendes."

During the interview, Mendes says that Cabello is his "favorite person in the whole world."

She also attended one of Mendes's shows.

Rumors of another duet start when Cabello posts this photo.

Looks like the rumors were right: the two release "Senorita." The song includes lyrics like, "You say we’re just friends / But friends don't know the way you taste / 'Cause you know it's been a long time coming / Don't you let me fall."

Cabello officially breaks up with her ex, Matthew Hussey.

"To my fans, if you really love me, please do not send people I love and care about hateful things," she wrote on Instagram. "You doing that really hurts me, and it's so unnecessary and heavy and damaging to add more pain to pain. There's a real person behind your tweets. You spamming them with hateful, insensitive things is really not funny, is causing all of us pain, and doesn't all reflect the values I talk about."

Remember, the two still haven't made anything official yet in terms of their relationship status. They're spotted kissing in San Francisco over Fourth of July weekend.

"They looked very into each other. Shawn and Camila were splitting pancakes,” a source told Us Weekly.

E! adds that Cabello's family was at Mendes's Miami concert.

"It already feels to them like they've been together for a lot longer than they have," a source told E! News. "They've known each other and been a part of each other's lives for a while so it's all very natural and moving quickly."

"Shawn and Camila originally were just enjoying spending time together and having a summer fling," another source told Entertainment Tonight. "Camila had just got out of a relationship and Shawn was in the middle of a massive tour. But Shawn and Camila have really fallen for one another."

"I've known Shawn for such a long time," Cabello told Variety. "And it's so much fun getting to work and do things with somebody who means a lot to you."

Things may be Instagram official. To commemorate Mendes's 21st birthday, Cabello posts this on Instagram, which includes an "I love you."

"Falling in love is like an infinite amount of levels and layers and angles," she said during an interview with Glamour. "I fell in love and just opened up. Everything was written in present moment."

The two perform "Senorita" at the MTV VMAs. It's ... something. There's plenty of PDA when they're in the audience, though they walk the red carpet separately.

The relationship is officially official. During his own interview with Glamour, Mendes says he's definitely in love.

“Honestly, I wanna say I wanna talk to you guys about this stuff, but it's not just me in the relationship," he said. "There's another person involved, and I can't say things that I feel. It's not just me deciding, you know?"

Cabello backs him up during an interview with Elle.

"People can say whatever they want to say. They can speculate, but at the same time, we are going to live our own lives, enjoy it, and fall for each other like nobody is watching," she said. "That is how I want to live. I never want to open the door for people to feel like they are involved. Like I said, I want it to be mine and [his]. That's why I'm so tight-lipped about it: because I want to protect it."

To prove it, this happens:

In an interview, Cabello explains why the two of them were hesitant to go big with their love story. They didn't want to lose their friendship, she explained to The Sun.

"It's almost more scary because you have more to lose,” she said. "When you first start dating a person and you know nothing about them, there's less at risk there. I think when you fall in love with somebody you've known for a long time, there’s more at stake. But it also feels more special because it feels like the love story you see in the movies of people who have known each other for a long time but been too stupid to realize it or say it and then it happens — and that’s beautiful too."

If anyone was wondering exactly when the two made it official, Mendes clears it up during a concert in Australia.

"We have been dating since July Fourth officially," he said, according to People.

Cabello talks about that friendship in an interview with Rolling Stone. "Our paths just didn't cross in that way romantically until we started hanging out again and writing," she said. "For me, it just brought it back."

Later that month, the two get tattoos together, too.

Shawn Mendes Took Camila Cabello to Get Her First Tattoo

During an appearance with Ellen DeGeneres, Cabello admits that she had a crush on Mendes for years before they started dating.

She offered another insight into their friends-turned-lovers situation, telling Jimmy Fallon that it was strange at first.

"It's so funny because when we first started going out it's so weird ... [dating] somebody who was your friend for a really long time," Cabello said. "The people around you already know them because you've known them for a long time, so it's just like, 'Now we kiss and hold hands.'"

The two are spending the coronavirus quarantine together, complete with concerts and morning walks. Before lockdown, Mendes flew across the Atlantic to celebrate Cabello's birthday in London.

There are more concerts in quarantine and the two even team up with the Ryan Seacrest Foundation to surprise patients at Children's National Hospital in Washington D.C.

Despite rumors of a split, Mendes and Cabello are still supporting each other via social media. Following the release of Mendes' new album, "Wonder," Cabello posted a heartfelt message where she called him, "my love."

"The world could use some magic, beauty, and Wonder always, but especially right now," she wrote. "@shawnmendes what a gorgeous gift to the world. He’s crafted this album with every last bit of his soul, his spirit, and his essence with the purest of intentions. My love, I’m so proud of the person you are and I’m so excited for people to see and hear your heart."

Later that month, in the trailer for his Netflix documentary In Wonder, Mendes admitted that all of his songs, both new and old apparently, are about Cabello. "My song comes on the radio or something and I'm like, ‘Everything's about you. They're all, they have always been about you.' She goes, ‘What do you mean?' Like, they're all about you. Like every song I've ever wrote," he said.

Mendes and Cabello get a puppy named Tarzan. Sharing a video of Mendes playing with the dog, Cabello wrote, "during uncertain times like this we need a reminder that sweet miracle things like puppies exist in the world too, meet the new member of the pack: Tarzan! Sending to love all of you guys and remember: regardless of the outcome, WE are the ones responsible for building the world we want to live in. the fight for BEING the society we want to see. That continues after this outcome is decided. This is what I’m telling myself to soothe myself right now because it’s the only thing we actually can control. love you guys and Tarzan sends a big puppy lick."

Mendes also shared some photos and a video of the adorable pup. 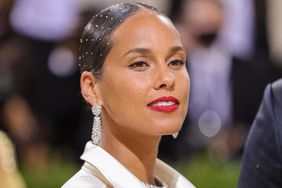 According to Shoppers, This Celebrity-Approved Brand's Face Serum Is "Youth in a Bottle"