Six months into a still-surging global pandemic, an economy in freefall, depression rates on the rise, and (another) year soaked in unjust police violence and political division, its safe to say 2020 has been a rough year.

But for me, one of the sole bright spots of this bleak, everything-fun-has-been-canceled year has been BTS. I've considered myself a fan for a few years (annyeong, ARMY!) but when the full flex of 2020 hit, I fell down the heart-melting, soul-soothing rabbit hole of content the Bangtan boys have amassed over their seven-year-long careers. Long, stressful days would dissolve watching their high-art music videos. Months of quarantine seemed a little less sad when I could giggle along to Jin's subtitled dad jokes and Namjoon's endearingly terrible cooking attempts. BTS stood for "bring the serotonin" for me.

And the hits kept coming. When their worldwide tour was canceled, they pivoted to produce a live concert from a soundstage in Seoul that I woke up at 3 in the morning to watch. When Suga dropped a surprise mixtape, I listened to it so much I would wake up with “Daechwita” playing in my head before I even opened my eyes. BTS (alongside their production company Big Hit Entertainment) donated $1 million to Black Lives Matter. Then they donated another $1 million to Crew Nation, a Live Nation campaign to support live concert crews who found their jobs dried up by the impact of COVID-19. Then they released another achingly beautiful song for the Japanese release of their album. Their goodness, their sincerity, and their overwhelming, heart-stopping talent buoyed me through the bleakness.

And guess what? The global superstars are continuing to dole out Bangtan blessings by releasing a new song, a new performance, a new 16-episode show, and more all in August. Can you hear me squealing right now?

Read on for everything you need to know about how BTS will save us all in August.

We have a lot of details about the new BTS single straight from the source. Bangtan casually live-streamed the news (via Korean broadcasting app V Live), "The song is upbeat and sung in English, just like 'MIC Drop' and 'Waste It On Me,'" they said. "We thought that the song sounded perfect as it is in English."

Fans are theorizing that the single will be a retro-infused, old-school anthem. The cassette tape and vinyl record merch hint at the ‘70s or ‘80s vibe, which seems to be confirmed by the cool, retro font of the official “Dynamite” social promotions. If that’s true, I’m spun out by the thought of that aesthetic. Bangtan at the disco? J-Hope as an old school B-boy? Jimin at the roller rink? Yes please, Big Hit!

Oh, and, yes: they confirmed a new album is coming in 2020. "We are preparing an album for the second half of this year, but decided to first release a single because we wanted to reach our fans as soon as possible," they said. "Due to COVID-19, people around the world have been going through tough times and we wanted to share some positive energy with our fans."

Before that payload of serotonin drops, we'll get two teaser photos (on August 10 at 11 am/EST and on August 12th at 11 am/EST). These photos will (most likely) set the vibe for the entire comeback—revealing the aesthetic of everything that will follow from performances to the new looks.

First time with BTS? One of the best parts of a new comeback era is the hair changes. Speculation started in earnest when BTS appeared in an online interview ("Map of the Soul: 7 The Journey," an exclusive event for Japanese fans) when — GASP!—three of the seven members were hiding their hair under hats. RM and V disguised themselves with fedoras and Jimin wore a beret. Jin skipped the dramatic hat completely and revealed a new coppery reddish-brown hue.

BTS will perform for the first time ever at the VMAs on August 30 at 8 pm/EST.

MTV coyly tweeted BTS would be "performing at the 2020 VMAs" but there's no way this isn't a live-streamed (from the safety of Korea) performance. Big Hit quickly released a statement explaining "The stage for BTS's new song "Dynamite" and related videos for MTV will be replaced by video transmissions filmed in Korea. In addition, BTS's appearances on US broadcasts, including The Today Show, are also being done in Korea."

Next question: what will BTS perform? It would be amazing to get a performance of "Dynamite" so soon after the song debuts, but they are nominated for Best Pop Video, Best K-Pop Video, and Best Choreography for "On" so it makes sense that they'd perform that. Dare I dream we get to hear both?!

BTS in the SOOP

BTS in the SOOP is a brand new show featuring the group staycationing lakeside in the peaceful woods of South Korea ("soop" means "forest" in Korean). The reality show will be streamed through the Weverse app and browser and can be ordered for $27.99 (note that pre-ordering does come with a free gift, an exclusive set of photo cards, but international shipping for me clocked in at $20.83). You'll get six 80-minute episodes and six 10-minute behind the scenes episodes.

The first episode drops on Thursday, August 20 at 9 am/EST.

According to the official description, "members will create their own schedules in advance and each spend time enjoying their hobbies. Though all the members will each be doing different things, the seven of them will be spending time together in the same place."

What does that mean? The two teaser trailers already dropped give us a few hints: Jin will fish, Suga will read a book, Jungkook will strum softly on a guitar, Tae will meditate while looking like a Disney prince, J-Hope will toss a toy airplane, Jimin and RM ponder their existence while standing by a lake.

Honestly, it all sounds perfect to me. In a vacation-less 2020 landscape, I am delighted to vicariously visit a peaceful lake at the edge of a blue-skyed Korean mountain town. I'm hoping we'll get a chilled out BTS vibing with nature—just what I truly need right now. I swear, if a single hour-long episode consists of the boys playing Uno (with Tae still not understanding the rules, even though his face is on the cards), I will be a zenned out happy ARMY.

Tiny Tan (short for "Tiny Bangtan") are adorable animated avatars of big BTS—a teeny group of cartoon cuties that have been popping up in teaser vids on the Tiny Tan official Twitter since July. On August 8th, they dropped a short film called "Magic Door" that's so delightful Pixar should be worried about the competition. Seriously.

Will Tiny Tan be a completely realized series? A full-length movie with a theatrical release? Mystery abounds, for now. The Tiny Tan Twitter hasn't released any follow-up news or teasers ... yet.

This isn’t the first delve into cutie-pie cartoons for BTS, of course. They created Their wildly popular BT21 characters which now boast 3 seasons of episodes, stand-alone stores abroad, and a million different pieces of squeal-worthy merch.

As with BT21 (and anything else BTS for that matter), expect a lot of merch. Tiny Tan is just too objectively adorable not to slap their likeness on toys, pajamas, water bottles, stationary, and everything else.

ARMY expert tip: expect Tiny Tan drops to happen at 6:13/KST. Every tweet from the official account so far has come at that exact time — a nod to Bangtan's birthday when the band debuted on June 13. 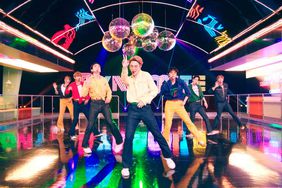