Bruno Mars has long channeled legends of decades past — James Brown, Elvis Presley, and Prince, to name a few — in his funk-and-jazz-influenced R&B hits. The same could be said for his over-the-top commitment to outfits inspired by previous eras. An artist in every sense, it seems like the 15-time Grammy-winning singer and musician can't help but match his aesthetic to his music.

As the pop star confirmed to Vogue, he has a similar creative process when it comes to music and fashion. "When I'm writing a song, it's about the emotion: What do I want people to feel?" he told the outlet. "I approach clothing that same way: How do I want to feel when I put on that jacket?"

If you trace his style evolution all the way back to the star's Doo-Wops and Hooligans era, '60s-inspired suits and faded hair were his signatures. When his "Finesse" single on 24K Magic dropped, it was clear Mars was channeling the '90s in both sound and aesthetic (see: that iconic performance with Cardi B). Next, "Versace on the Floor" and Bruno's patterned silk sets, courtesy of Donatella, of course, marked a clear '80s tribute. And now, Bruno's wardrobe of wide collars, leisure suits, and funky patterns make it evident that he's in his '70s era — as if his Silk Sonic supergroup with longtime collaborator Anderson Paak and recent discography didn't make that obvious.

Regardless of the decade he's emulating, Mars's fashion sense and stage presence make him larger-than-life — and sure, Google confirms that the living music legend is somewhere around 5'5" height-wise. But, his chest hair-baring button-downs, flared pants, and perfectly coiffed curls are all a tribute to the newest iteration of Hot Girl Summer: Short-King Summer. Scroll through for the original Short King's best '70s-influenced 'fits.

In June, Mars attended the 2022 BET Awards wearing orange-and-navy plaid trousers paired with a matching blazer and an unbuttoned shirt with an exaggerated collar. He accessorized with a beige fedora, white boots, and large aviator sunglasses. The most '70s part of it all? The thin, sliver of a mustache.

In 2021, Bruno launched a clothing line with Lacoste, and the singer told Vogue at the time that big collars were one of his favorite trends. "There's something magnificent and powerful about a collar being big," he said "It gives confidence to whomever's wearing it; it feels like a cape."

At the 2022 Grammy Awards, Mars took the stage with his bandmate Paak in a white bedazzled suit that conjures up memories of Elvis's iconic last performance in 1977. Bruno used to do a wicked Elvis impersonation — at just 4 years old, he performed in his family's band in Hawaii.

Silk Sonic is undeniably influenced by the '70s — the band's song "Skate" is literally a tribute to retro roller rinks. The two performed for the very first time as a unit at the 2021 Grammys in matching rust-colored suits with taupe button-downs and massive aviator shades. Gold chains are obviously a must, and Mars finished off the look with a matching gold wristwatch.

Another patterned suit, undone shirt, aviator sunnies — with a cigarette and tiny 'stache to boot. This whole look is screaming John Travolta in Saturday Night Fever.

An unbuttoned Hawaiian shirt and flared pants are practically the poster child(ren) of the decade. Bruno put a 2022 twist on the throwback look with white boots and a woven bucket hat. There's something about an open collar on a Short King that just works. 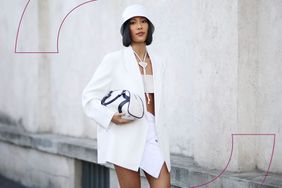