"She is a strong, badass, unstoppable woman, and that's the only thing that is OBVIOUS."

Jamie-Lynn Spears is standing up for her "strong, badass, unstoppable" sister Britney after a commenter questioned her mental health.

On Tuesday, the younger Spears sister shared a tweet from singer Halsey on Instagram, which read, "No jokes right now. I have dedicated my career to offering education and insight about bipolar disorder and I’m so disturbed by what I’m seeing. Personal opinions about someone aside, a manic episode isn't a joke. If you can’t offer understanding or sympathy, offer your silence."

Jamie Lynn added in a caption, "If you deal with mental illness or care for someone dealing with mental illness, then you know how important it is to respect the situation with privacy for the person, and the family trying to protect their loved ones, no matter how it may appear to the public, and as the public we must learn to do the same.

I pray this doesn’t bring shame to anyone dealing with mental illness, you are not alone, and you are loved.

Sending all my love and prayers to all of you."

One commenter on the post referenced her sister Britney, writing, "How about your sisters [sic] OBVIOUS mental illness? Why don't you speak on that?"

"You have no right to assume anything about my sister. And I have no right to speak about HER health and personal matters," Jamie Lynn responded. "She is a strong, badass, unstoppable woman, and that’s the only thing that is OBVIOUS.

The comments came after the "Free Britney" movement has begun to gain traction again in recent weeks. The movement is centered on Britney's conservatorship, a legal concept in which someone is thought to be unable to care for himself or herself, and an adult with a relationship to them is appointed to manage their affairs. According to a 2016 New York Times report, she was in a conservatorship in which her father Jamie oversees her personal life and finances while Andrew M. Wallet, a lawyer, is a co-conservator of her estate. E! reports that the two have been her conservators since Spears's dual emergency hospitalizations in January 2008.

Britney Spears Is the Unofficial Spokesperson for Mask Wearing

Her father has since stepped down as her conservator, and it's been reported that Britney hopes for her mother, Lynn, to be part of the conservatorship. 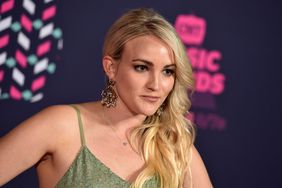