The singer and her personal trainer boyfriend have been dating since 2016.

Congratulations are in order for Britney Spears and boyfriend Sam Asghari, as the happy couple is officially engaged!

"I can't fucking believe it 💍💍💍💍💍💍❣️!!!!!!," the "Toxic" singer captioned the Instagram reel. In the video, the singer shows off her new round solitaire ring while standing with Asghari. At one point Asghari says, "Look at that. Do you like it?," to which Spears exclaims "Yes!"

This news comes only several days after her father, Jamie Spears, officially filed to end the conservatorship he has had on her for 13 years, which prohibited her from removing her IUD or marrying Asghari.

The 39-year-old singer first met 27-year-old Asghari while filming her music video for "Slumber Party" and rumors about her romance with the backup dancer began to pick up steam in November 2016, after the started sharing super-cute photos of the pair together on social media.

Back in 2017, Spears offered more details about their courtship during an interview with AMP 103.7's Fast in the Morning with Nathan Fast and Sybil Summers.

"I think we were shooting and we were doing this scene where I was doing the walk scene through the hall to go through the door to go to the bedroom, and we were sitting there and we were waiting and waiting together for 20 minutes at a time," she said of their first encounter.

"So we were basically forced to talk to each other and he has no idea—I mean, he knows my name — but he doesn't know me as a person. He's like, 'What is this girl like?' and I have no idea who the hell he is."

After chatting about sushi and a potential first date, he gave her his number, which she lost for about five months. The rest, as they say, is history.

Spears first wed childhood friend Jason Alexander in 2004, but the marriage only lasted 55 hours. She then married Kevin Federline later that year, but filed for divorce in November 2006. The exes share two children, Sean, 12, and Jayden James, 11.

Congratulations to these two! 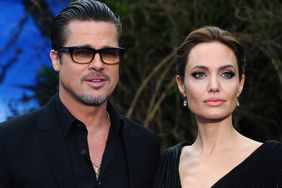