We've entered the era of feminine frills and Shein hauls.

There is no dress code for someone like Britney Spears, who has emerged from under the suffocating thumb of her conservatorship to find herself finally in control of her own image for the first time in 13 years. But even with the freedom to hire a stylist or partner with a brand, Spears has made it abundantly clear that she — and she alone — is the one calling the shots.

During a recent investigation into the conservatorship, which began in 2008 when the pop star was just 27 years old, the New York Times discovered that Spears wasn't allowed access to her own money or a credit card, despite maintaining a steady income which put cash in the pockets of her father, Jamie Spears, who served as conservator. During her successful Las Vegas residency, for example, the singer was limited to a $2,000 weekly allowance even as the show made millions.

The conservatorship was terminated on Nov. 12, 2021, though it wasn't until earlier this year, on Jan. 19, that the now-40-year-old regained full access to her funds.

As she documents her post-conservatorship life on Instagram, Spears has shown off a few new purchases. She's recently gravitated toward frilly, feminine pieces in shades of baby blue or pastel pink. Sometimes, to change up the vibe, she opts for a slinky animal-print slip or a skintight minidress with a plunging neckline; sometimes, she chooses to wear nothing at all.

To be clear, Britney's access to new clothing is not her most radical new freedom. Her ability to go on a shopping spree is not the reason that legions of fans came together to "free Britney." But fashion, as ever, gives us a glimpse through the window into the wearer's emotions. For so long, America's sweetheart was silenced, controlled — a puppet on parade.

Now that she's in complete control of her life and her image, what does Britney Spears have to say?

On Jan. 20, two months after the dissolution of the conservatorship, Spears debuted purple hair, which, by her own admission, was a result of boredom — and the fact that she could.

Her violet strands didn't last long. By February, her hair was back to a honey-blonde hue, her dark roots adding dimension and texture. She wears it purposely messy and teased at the roots, curtain bangs swept to the side. Since dying her hair back to a Southern Belle blonde, Britney hasn't really changed up her beauty routine much from her pre-freedom era. Though she wrote on Instagram that she's lusting over Chanel beauty products, a full makeover is probably not in the works. The heavily lined lids — a look that was popular in the mid-2000s, when she was last in control of her image — appear to be here to stay.

Back before her conservatorship, Spears's style was low-key but still trendy; she wore the lowest low-rise denim, the teensiest tees, and the itty-bitty mini dresses that dominated fashion at the time. This was the era before paparazzi strolls had become gamified, before stylists made sure their clients never left the house looking anything less than picture-perfect. Now that she's back in action, Spears's "anything goes" energy feels like a refreshing throwback to an era less concerned with keeping up with the Kardashians. (She could work with a stylist, but then, why would she? Imagine being betrayed by the people closest to you in your life, and then placing your very image in someone else's hands again.)

Spears still leans towards trends that align with her previous naughties style: She may wear a trendy corset top, but she's pairing it with super low-rise denim. The cottagecore puff sleeve, which will go down as a hallmark of 2010s style, is one of her favorite silhouettes, especially when paired with an off-the-shoulder neckline or a frilly hem. It's also the most consistent style choice of the last 10 years, a favorite since before she regained her freedom.

On a recent excursion to a farm, Spears gushed over a milkmaid-style dress in a toile print featuring ruching around the bust and shoulders. It's one of the first pieces she denoted as "new" since the termination of her conservatorship, and a reminder of her Southern heritage — the soft colors, the romantic silhouette, it's all very Draper James, but with the sex appeal of Reformation. It's easy to forget about Spears's Louisiana upbringing, but her devotion to the feminine ruffles (even with her sexy, super-cropped spin on the trend), is a constant reminder.

Spears also keeps a steady flow of dressier looks in rotation, almost always paired with her brown pumps (which she loves, despite the haters) or black pointed-toe heels. These dresses are typically a bodycon fit and super-short, another holdover from her past, both before and during the conservatorship. But what stands out to many is that even though she now has access to her money, she's continued to shop at budget retailers like Shein and Missguided.

In the comments section of her IG, fans question why she's not wearing head-to-toe designer garments, insisting that she can do better than fast fashion. To me, though, her gravitation towards these sites makes sense. Think about the presentation of clothing on Shein, which often selects product pictures that look more like influencer stock images than the traditional headless, sexless models on designer retailers like Ssense or Net-a-Porter. To those without an extensive fashion vocabulary or an interest in looking like, say, a model on a Gucci runway (It's not for everyone!), Shein clothing is easily digestible. Compared to some designer pieces, which can be intimidating even when you work in the industry, fast fashion accessible, easy, and casual — all markers of Britney's past and present style.

These sites also cater to younger shoppers who prioritize "sexy" over "high fashion." Even before she was the tabloid fixture, a punchline for Jay Leno and his ilk, Spears was the relatable, "girl next door" type — and that's one of the reasons she was so beloved. It makes sense that she's still dressing like that girl. Additionally, after being restricted to a budget of someone else's making for so long, these retailers are probably familiar and safe for her.

For so long, concerned fans combed Britney's socials looking for clues, something with a deeper meaning, as though Spears was telegraphing a secret message in code. Some of those #FreeBritney alumni haven't moved past that phase. They still think she's going to yell "gotcha!" at any moment. But maybe this is just what it looks like when you get a second chance at life. Spears was barely an adult when she entered her conservatorship. Since then, she's been treated as both a child and a captive.

We're used to seeing public figures, especially women, using their clothing to communicate with the public — to tell people something they might not be able to say explicitly, or to use their own spotlight to further causes close to them. It's hard not to look at Spears and think that there's something else, something we're missing, something that needs to be dissected and hyper-analyzed until we, the observers, crack the code.

Personally, I don't think that's the case here. What I see is a woman who is healing from intense trauma, who is finding small joys in the decisions most of us take for granted every day: Experimenting with style, embracing sexuality, and putting on a brave face for social media. I'm sure there's more to the story, but right now, this is all she has shared.

For the first time in her life, Britney is steering the ship, and it may take a while for her to get her sea legs. She may shop at Shein forever. She may eventually find a stylist she loves and trusts. What matters at the end of the day is that she has the final say. That Britney Spears will wear whatever she damn well pleases. 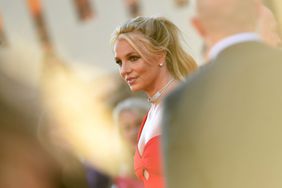