Britney Spears has finally found her voice, and she's not afraid to speak up. Hours after commenting on her most recent court victory in her conservatorship case, the pop star called out those closest to her who are now posting in support of the #FreeBritney movement when they previously stayed silent.

On Friday, Spears shared a not-so-cryptic quote directed at those certain people on Instagram, and didn't hold back in the caption of her post. "There's nothing worse than when the people closest to you who never showed up for you post things in regard to your situation whatever it may be and speak righteously for support … there's nothing worse than that !!!!" Brit wrote alongside an image of black text on a white background that read, "Never forget who ignored you when you needed them, and who helped you before you even had to ask."

She continued, "How dare the people you love the most say anything at all … did they even put a hand out to even lift me up at the TIME !!!??? How dare you make it public that NOW you CARE … did you put your hand out when I was drowning ???? Again … NO."

Spears failed to mention anyone by name — only telling whomever it is, "you know who you are."

"You actually have the nerve to say anything about my situation just to save face for yourself publicly !!! If you're gonna post something …. Please stop with the righteous approach when you're so far from righteous it's not even funny," she added, including a trio of middle finger emojis. Britney concluded her scathing note with a shout-out to her fans, writing: "PS if you're reading this today and you can relate …. I'm sorry because I know what it's like … and I send you my love !!!!"

While it's not clear exactly who Britney was referring to her in her post, many believe her message was meant for her younger sister, Jamie Lynn, who only recently spoke out about the subject of her sibling's years-long conservatorship battle. This week, on the exact day that Britney won the ability to hire a new attorney, Jamie shared several notes on her Instagram Stories.

"Once you choose hope, anything's possible," read one quote she posted, while another message in her own words said: "Dear Lord, Can we end this bull s--t once and for all. Amen."

Last month, Britney spoke out about her conservatorship for the first time in court, and amongst many accusations (that she was forced to work against her will, medicated, and not allowed to remove her IUD), she also revealed that she wanted to sue her family. "I would honestly like to sue my family, to be totally honest with you," she told the judge. "I also would like to be able to share my story with the world, and what they did to me, instead of it being a hush-hush secret to benefit all of them. I want to be able to be heard on what they did to me by making me keep this in for so long, it is not good for my heart." 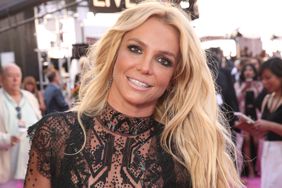