"Remember, no matter what we think we know about a person's life it is nothing compared to the actual person living behind the lens!!!!"

"Each person has their story and their take on other people's stories !!!!" she wrote in her tweet replying to a video of her performing "Toxic" from three years ago. "We all have so many different bright beautiful lives !!! Remember, no matter what we think we know about a person's life it is nothing compared to the actual person living behind the lens !!!!"

While she didn't specifically mention that her tweet was in response to the documentary, many fans read it that way. Especially after her boyfriend, Sam Asghari posted a more direct statement to his Instagram on Feb. 8.

"Now it's important for people to understand that I have zero respect for someone trying to control our relationship and constantly throwing obstacles our way," he wrote in a post on his story. "In my opinion, Jamie is a total dick." "I won't be going into details because I've always respected our privacy, but at the same time, I didn't come to this country to not be able to express my opinion and freedom."

He also expressed his support for his girlfriend in a sweet statement to People. "I have always wanted nothing but the best for my better half, and will continue to support her following her dreams and creating the future she wants and deserves," he said. "I am thankful for all of the love and support she is receiving from her fans all over the world, and I am looking forward to a normal, amazing future together." 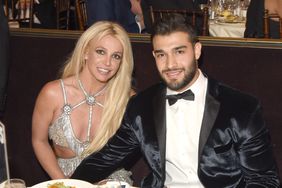