Britney Spears had a well-earned night off yesterday, and she decided to live it up in true Vegas fashion. The 34-year-old singer hit the Vegas strip with her mom for a Thunder From Down Under experience, and you have to see the hilarious pictures!

The "Make Me" singer has her own Vegas show, and she decided to check out some of the other acts on her night off. Like any girl would, Spears chose the hunky male strip show to attend with her mom and friend. She wore an off-the-shoulder green sweater, dark jeans, and chunky tan booties for her night on the town. She completed the outfit with a black choker, and her hair was pulled into a half-up style. Spears and her mom took a minute to pose with the shirtless stars, and she shared the priceless snap on Instagram, writing, "Girls night out with the boys from down under."

Spears also posted an image from the performance—in it, she's covering her eyes as the men rip off their shirts. The image was captioned with, "Just a night off in Vegas." We're willing to bet that she peeked, though. 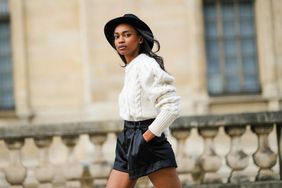