And it was only slightly troll-y.

Blake Lively rang in her 35th birthday on Thursday while the rest of the world waited with bated breath for her husband Ryan Reynolds's annual Instagram tribute and trolling. And this year to celebrate the actress's milestone year, Reynolds had only nice things to say (mostly).

The actor shared a carousel of images in honor of Lively's special day with several snaps from the 2022 Met Gala (where Lively slayed the carpet in a stunning Versace homage to New York City), a couple date-night selfies, and one hilarious photo of Lively on the couch with a piece of lettuce covering her face.

"Happy Birthday, @blakelively," Reynolds wrote in his surprisingly innocuous post. "You're spectacular. I'm not sure if you were born or invented. Also, thank you for urging me to leave the house every now and again. ❤️"

Reynolds recently called out Lively during an appearance on Jimmy Kimmel Live!, saying she wasn't too happy with him after he spontaneously purchased a soccer club. He and friend Rob McElhenney decided to buy part Wales's Wrexham AFC football team — without running it past Lively.

"I remember after you reached out about this absolutely insane idea," Reynolds recalled to McElhenney, who was filling in for Kimmel. "I remember seeing Blake and saying, 'I have bad news and I have really bad news. The bad news is I slipped into someone's DMs again. The really bad news is that I might have bought half of a fifth-tier national football league in Wales.'" Lively's response to that was "not good."

"We're still working through that one," he joked. Reynolds and McElhenney now have docu-series about the process titled Welcome to Wrexham that follows their journey in becoming owners of the team. 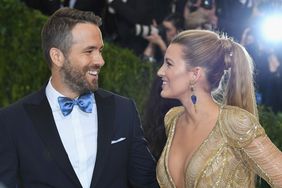