"I'm so excited!" said Alicia Keys (in Armani Prive) when she hit the red carpet at the 2008 Black Ball, held at New York City's Hammerstein Ballroom. "There are so many incredible artists and people here." Among the notable guests who came out to support Keys and help raise funds for her Keep Child Alive Foundation were Jessica Alba (in Gucci), Padma Lakshmi (in Naeem Khan) and John Mayer. The evening hit a high note when Queen Latifah accepted the Humanitarian Award and Justin Timberlake hit the stage to rock the audience. What a way to give back.

"I have alot of bad days. This just happens to be a good hair and makeup day," said Tyra Banks, who got a final touch-up from her beauty squad as she arrived at the event. Banks-who joined her tablemates to tuck into a meal of barley salad and African chicken stew-also had a good fashion moment, donning a curve-hugging gown by Michael Kors for the occasion.

"[Alicia] is a powerful, powerful woman," said John Mayer, when asked why he made time for the event. After engaging in a bidding war with Queen Latifah during the evening's live auction-which ended in a tie-Mayer was among the lucky guests who took in performances by Justin Timberlake and Chris Daughtry.

Keep A Child Alive co-founder Keys congratulated friend Queen Latifah, who was presented with the Humanitarian Award. "You didn't have to honor me tonight to get me to keep giving," Latifah (in Gustavo Cadile) exclaimed during her moving acceptance speech. The Queen also left the audience with some food for thought, opening up about overcoming abuse and poverty in her own life. "Just think, the person you could be contributing to could be a Queen Latifah in the future," she mused.

With Keys at the piano, British chanteuse Adele was among the evening's A-list entertainers, moving the crowd with her rendition of "Make You Feel My Love."

Event co-host-and Keep A Child Alive Global Ambassador- Iman and husband David Bowie slipped in to the Hammerstein Ballroom just before the program got underway.

Keys and Timberlake put the finishing touches on the memorable evening when they teamed up on stage. "To be supported by people you admire is unbelievable," Keys said when asked how it felt to be backed up by her famous friends. 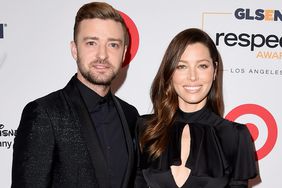