Who Is the Black-and-White Photo Challenge Actually For?

From Khloé Kardashian to Ivanka Trump, celebrities are joining in on the latest selfie trend to sweep Instagram. But what, exactly, is the point?

Dina Gachman is an Austin-based writer, author and bestselling ghostwriter. She is a frequent New York Times, Vox, InStyle and Texas Monthly contributor and branded content creator who has worked on Clio winning videos. Dina is also the author of the upcoming book of essays about grief So Sorry For Your Loss: Learning to Live with Grief, Even If It Kills You, coming Spring 2023 from Union Square & Co.

Update: Multiple sources have stated that the most recent black-and-white photo challenge is a part of a movement to raise awareness about the femicide in Turkey. In its migration to the U.S., that message was largely lost, including the hashtags #istanbulsozlesmesiyasatir and #kadınaşiddetehayır, which roughly translate to roughly translate to “say no to violence against women” (kadına şiddete hayır) and “enforce the Istanbul convention” (Istanbul sözleşmesi yaşatır). To learn more about the femicide, click here.

I have a visceral reaction to anything remotely resembling a chain letter. Remember the “recipe exchange” emails sabotaging our inboxes in the early days of the pandemic? I deleted them all, with gusto. So, when I woke up several mornings ago and discovered my Instagram feed crowded with those black-and-white selfies of women with the #ChallengeAccepted hashtag, I bristled. I’m all for female empowerment and women supporting other women, but seeing the parade of photos caused my inner skeptic to rear her head and ask, how exactly is this a “challenge,” and who is it benefitting?

I wasn’t “challenged” by any of my friends for a few days, which, despite my profound skepticism, was a little upsetting. Even though I had no intention of joining in, I started to think that maybe I wasn’t inspiring enough or maybe my friends didn’t love me. It stung. But then, as the challenge numbers grew (4.6 million hashtags on Instagram and counting), I started getting some invites. I felt loved! But instead of posting my own photo, I just wrote back a private message saying, “I love you and thank you for challenging me, but I’m not doing it.”

Am I a jerk? Maybe. Am I going to hell? I hope not. But really, how is a black-and-white selfie going to change the world?

Viral challenges like this get kicked into high gear when celebrities join in. Everyone from Ava Duvernay (who captioned “Pretty sure this is just a cool excuse to post pix…”) to Hilaria Baldwin (who is doing a handstand in her photo) to Khloé Kardashian and Ivanka Trump (with a throwback pregnancy selfie) have become links in this virtual chain. I’m not the first to question the trend, and to feel like it’s all performance, no substance. Even with fellow detractors sounding off, I was afraid to speak out at first. I mean, who wants to go against female empowerment?

In a recent New York Times piece about the challenge, Taylor Lorenz writes, “This is not the first time Instagram users have leveraged black-and-white selfies in support of a vague cause.” The challenge has been eviscerated on Twitter by other skeptics like myself for its vagueness and vanity, but for every grouch on the sidelines, there are thousands of women joining in, spreading a message of positivity and support. It might be harmless, but that’s kind of the issue. Revolutions aren’t powered by selfies. At least, I don’t think they are.

Some have said that a surge in female empowerment sentiment in the wake of Rep. Alexandria Ocasio-Cortez’s takedown of Ted Yoho’s sexism in Congress sparked the challenge. Others trace it to a movement in Turkey where women posted black-and-white photos to raise awareness about femicide. If that’s the case, I guess I just wish something linked back to an organization we could support or donate to, instead of just being … a bunch of selfies.

I asked a few women why they joined in on the trend, and if they knew the origins or if it was just a fun challenge and a way to pass the time. Lakshmi Jayanthi, an entrepreneur in Atlanta, said, “As a perpetual googler of everything, I looked at the origins and thought it was meaningful and pretty easy to do.”

Kerryn Gallagher, an educator in Oakland, said, “I figured it was in support of everything happening against moms and women across the country, and it was about supporting women and all of their endeavors for justice.”

Like the black squares that became ubiquitous on Instagram as a show of solidarity and a way to amplify Black voices, the #ChallengeAccepted movement, if you can call it a movement, represents a well-intentioned, but ultimately pretty empty gesture. As a response to all the black-and-white selfies, some women have started sharing photos of other female icons who have inspired them, which is something I might be able to get behind. It would be even better if the posts called out organizations supporting women, driving actual action and change.

“I felt the message behind this challenge was one of community and unification,” says Sejal Hingrajia, a digital media consultant in Los Angeles. “COVID is so isolating, and going through Instagram and seeing all the posts and feeling a connection made the world seem a little smaller in the sense that even though we all have different stories, we’re all women with similar hopes and fears and struggles.”

That’s a message I can get behind, and respect. Even though I feel a slight tinge of guilt about not joining in with this chorus of women, though, I still don’t feel like posting a black-and-white selfie is the best way for me to prove my solidarity.

There’s a quote that’s often attributed to Madeleine Albright that goes, “There’s a special place in hell for women who don’t help other women,” and I hope that by not accepting this challenge, I don’t wind up in that place. Even though it might just be a gesture, sometimes gestures do have meaning, even if it’s a black-and-white photo of a celebrity doing a handstand, or a woman gazing meaningfully into the distance. If it makes you feel connected, maybe that’s a cause in itself. 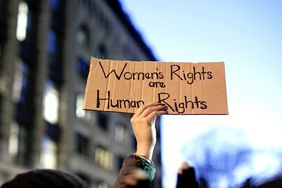 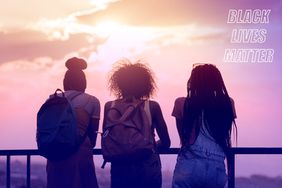 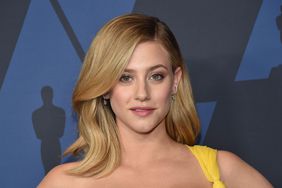